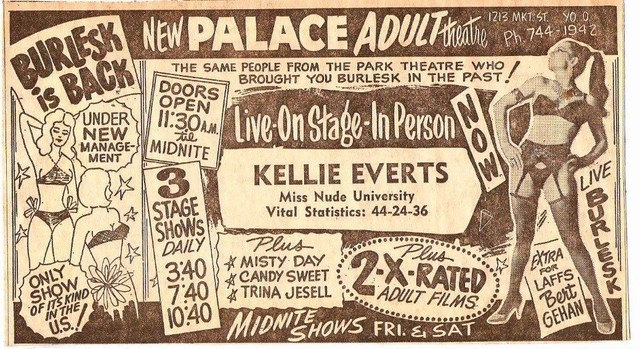 A short lived theater owned by the people who also owned the Park Adult Theatre on West Federal Street. The City shut this theater down. The building was later demolished.

What was so ironic was the fact that there were three “Adults Only” movie theaters before an angry dancer put the New Park Theater to the torch, but the city only targeted the Palace Adult Theater. Before it opened on Market Street, it was located on Vindicator Square until the Vindy put pressure on the city to shut it down because it didn’t want it’s male employees frequenting the theatre yet it gladdly accepted the money that the ads cost.

This was the last Market Street theater on a street that was a destination for entertainment up to the 1970’s. The Uptown would stop showing movies and became home to Easy Street Productions a professional theatrical group that specialized in musicals, but as Market Street started to deteriorate and become a war zone of crime, even the Uptown was forced to abandon the Uptown Theater and move all its shows to Powers Auditorium.