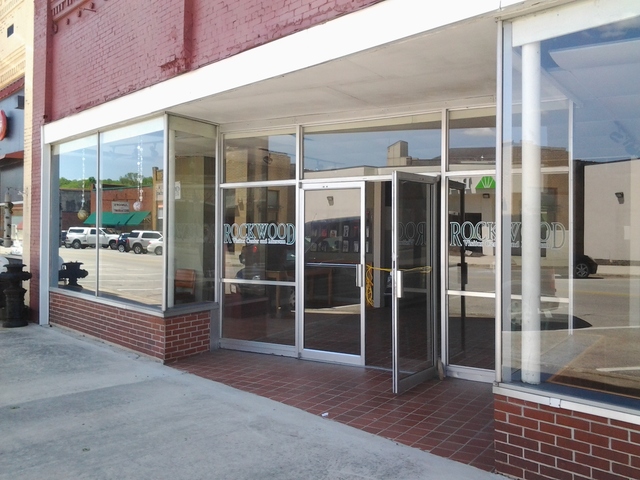 The late-Victorian brick building shell that once housed the Lyric Theatre still stands on the southwest corner of Rockwood Street and Chamberlain Avenue. The date 1893 is on the building. The Lyric Theatre was listed as (Closed) in 1936. It reopened as the Ritz Theatre and closed in 1953. At some point, the building was gutted and remodled into a J.C. Penny store. The Penny’s burned about 1970, but Penny’s rebuilt - further erasing any trace of the theatre. A new, flat, concrete slab floor was installed and a new steel bar-joist roof structure built. As of 2015 the building has been stripped to bare structure and is being rebuilt into a history museum.

According to an article in the September 28, 2014, issue of Roane County News, the Lyric Theatre was the same house that was later known as the Ritz, which operated at least as late as 1953. An artist who goes by the single name Susanne has a few paintings of Rockwood posted online, and this street scene dated around 1940 shows the Lyric. Her painting of the Ritz is a close view that doesn’t show the details of the upper part of the building or its surroundings, but it’s the same red brick front. The house had a different marquee as the Ritz.

This item from the “Picture Theaters Projected” column of The Moving Picture World, May 20, 1916, is probably about the remodeling project that became the Lyric:

Colvin & Howard were mentioned as operators of the Lyric Theatre at Rockwood in the July 2, 1921, issue of Exhibitor’s Herald. Then, Motion Picture Herald of November 14, 1936, mentioned Mr. W. L. Howard, manager of “…the local theater….” in Rockwood. The Roan Theatre had apparently not yet been opened.

I suspect that the only original parts of the theater building still standing are the facade and the common wall shared with the narrow shop next door. Most of the wall along Chamberlain Street appears to be of concrete rather than the brick that would have been used in the original 1893 structure. That wall, and probably the back wall as well, must have been part of the 1970 post-fire rebuilding by J. C. Penney’s.

The local film archive in Knoxville has this home movie showing a snowball fight in Rockwood. The film shows both the Lyric and the Ritz in operation. The building on this page was the lyric, but the Ritz was across the street and a block south. Link