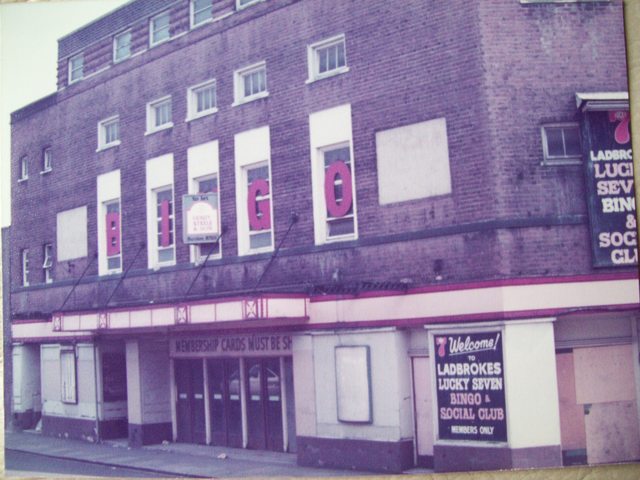 Located in the Potteries town of Burslem, Staffordshire. The New Palace Cinema was built on the site of the Burslem Picture Palace, which had to be demolished when its roof caved in during heavy snow on 21st January 1936. It was on the opposite corner to the Coliseum Cinema (later Gaumont).

The New Palace Cinema was opened on 17th October 1936 with Arthur Tracey and Anna Neagle in “Limelight” and Gene Autry in “Sagebrush Troubadour”. The cinema was designed in an Art Deco style by local Tunstall based architect Frank V. Hulme, of architectural firm A. Cotton, Son & Hulme. Seating was provided for 1,200 in the stalls and 600 in the circle. There was café in the circle foyer. The proscenium was 40 feet wide, the stage 28 feet deep and there were three dressing rooms. It was equipped with a Western Electric(WE) sound system.

The New Palace Cinema was re-named Ritz Cinema on 5th August 1951 and was part of the Southan Morris chain of S.M Super Cinemas. It was taken over by the Newcastle based Essoldo chain on 26th August 1954 and was re-named Essoldo in 1962. The Essoldo was closed in 1968 and was converted into a bingo club. It was demolished in 1989