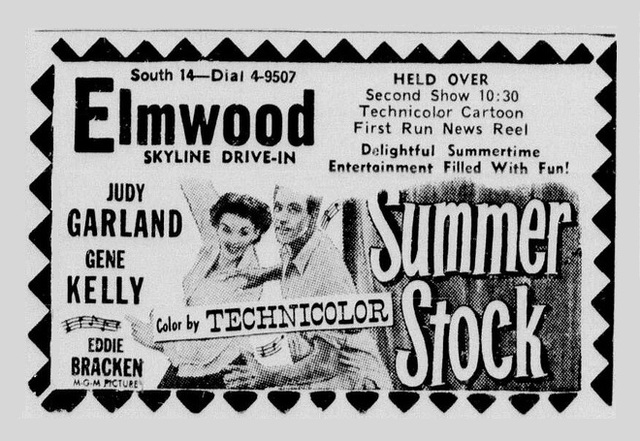 Abilene’s first drive-in, the Skyline Drive-In launched April 1, 1947 with John Wayne in “Tall in the Saddle”. Initially it only one single community speaker. The original owners were two armed service veterans who operated the theatre for one season before selling it to George and Ruth N. Likins of the Windsor Hotel. The Likins would modernize the facility in its second season, and renaming it the 14th Street Elmwood Drive-In. In 1953, the name was shortened to Elmwood Skyline Drive-In. Ruth Likins showed he last film on February 14, 1965.

The Elmwood Skyline Drive-In was demolished in January 1966 and the Bank of Commerce Building was built on the site. In 2015, the bank building still stands.

Located just a half mile from McMurry College was the Abilene’s first drive-in theater, the Skyline Drive-In launching April 1, 1947. Two veterans, Carroll Jones (656th Tank Destroyer Battalion) and Chuck L. Williams (Army Air Force) opened the Skyline at 3300 S. 14th Abilene 79605. On the the 46' high tower with its 30x40' screen was John Wayne’s “Tall in the Saddle.” At its opening, the drive-in had one central speaker system and could hold 400 cars. Closing November 23, 1947 for the winter season, the theater rethought the central sound system.

When it opened for season two, it had new ownership of George and Ruth Likins on May 10, 1948, it had two-way speakers which allowed you to either listen to the movie or to talk to the concession stand to order food. The Theater would be knowns as the South 14th Street Elmwood-Skyline Drive-In and switched to year-round operation with 400 watt in-car heaters from 1948 to 1953. In 1953, the theater name was trimmed to the Elmwood Skyline Drive-in. The Likins would also build a new wide-screen red brick tower to keep the theater vibrant in a highly-competitive market. Ruth Likins would sell the property for $225,000 showing her last film on Feburary 14, 1965. Advertisements counted down to the final day’s showing of “Yellowstone Kelly” and “Wind Across the Everglades.”

The Elmwood Skyline would be raised in January of 1966 for the Bank of Commerce Building which as of the mid-2010s was still standing.

Opened with “Tall in the saddle”.