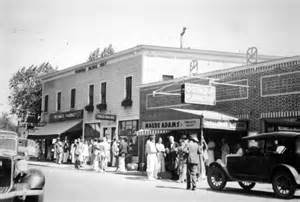 The Ogunquit Square Theatre was opened in 1939 and was a summer operation in Ogunquit.

The Theatre Historical Society archive has the MGM Theatre Report for the Ogunquit Square Th.; it’s Card # 418. Address is Water St. There is an exterior photo dated March 30, 1941. Condition is Poor (but “Fair” is also written on the card). The report says it was opened in 1939, was not showing MGM films, and had 500 seats. In these reports most new theaters were said to be in Good, Excellent, or DeLuxe condition, so it’s unusual for them to describe a 2-year-old theater as Poor or Fair. The report also points out that it was a Summer operation. It later was part of the Levinson circuit of Boston.

The theater was on Water Street in Ogunquit. But as of 1976 there was an Ogunquit Square Theatre showing movies in the summer located at 5 Shore Road. Was Water Street renamed Shore Road ?? If not, then the 1976 operation was a different building using the old name. That cinema apparently lasted into the 1990s.

The Ogunquit Square Theatre page from the Cinema Data Project gives the location as “Water St., Shore Rd.” I’m guessing that means the street name was changed (the only other thing it could mean is that the theater was at the corner of Water St. and Shore Rd., and there is no Water Street in Ogunquit today.)

There’s no address of 5 Shore Road today, either, The description cited by Cinema Data says the theater was in a one-story brick building. I think it might be the building that is now occupied by a retail shop called the Barrel Stave (15 Shore Rd.) and two other shops with higher addresses, though that building currently has no resemblance to a theater. The theater building might or might not be gone.

The entrance in 1941 was in a one-story building. And it looks good, not “Poor”/ “Fair”. One of the seating capacities in the Cinemadata listing is 465. I suspect that this is correct, and the 500 seats on the MGM report is a matter of rounding-up.

Or it’s one of those situations where one side of the road has one name, the other a different one. There are a couple of those in my area.

Doing some quick research I came upon the Ogunquit Playhouse, which is a long time, live, summer theater. The original location was the one pictured on Shore Road above. I came upon a picture of the original Playhouse, which was a one story building with a brick façade next to a two story, white frame building. This is the spot. The Playhouse has subsequently relocated.

Nowhere in the Playhouse history on their home page do they indicate other than live performances were presented. So……..

For anyone wishing to check out the image to which I refer, I did my inquiry at Ogunquit Theater Photos. It was about the 30th image and shows people on the street where a performance by Maude Adams in Twelfth Night is advertised.

This page of the Ogunquit Playhouse website says that the first performances were presented in 1934 in the building on Shore Road,which had previously been a garage. The Ogunquit Playhouse moved into its present home on Route 1 in 1937. As the MGM report that Ron cited says that the Ogunquit Square Theatre opened in 1939, the old playhouse must have been dark for a couple of years before being converted for movies. (This page also has the photo robboehm referred to in the previous comment.)

The news that the Ogunquit Square started life as a legitimate theater, coupled with the satellite view of the building at Google Maps and the Bird’s Eye view at Bing Maps (much clearer than Google’s satellite) convinces me that the entire theater building is still standing. There is a tall structure at the back of the building which I thought looked like a former fly tower, but as I had thought the theater had opened as a movie house only I concluded that it might be a later addition, or even part of an entirely new building built on the theater’s site. Now that the theater’s origin as a legitimate house is known, it’s clear that it’s all still there, but converted to other uses.

Thanks to robboehm and Joe Vogel for jogging my memory. Yes, the Ogunquit Square Theatre is a remake of the first Ogunquit Playhouse. In 2005 I wrote some theater profiles for the June 2006 convention in Boston of the Theatre Historical Society. One of the theaters profiled was the Ogunquit Playhouse. Here’s a summary of parts of what I wrote: “10 Main Street, 688 seats, Opened July 17, 1937. Walter and Maud Hartwig were summer visitors to Ogunquit from New York City where they were active in off-Broadway theatre. They believed that a high-quality playhouse would prosper in Ogunquit. They acquired a commercial garage on Ogunquit Square and converted it into a theater, opening on July 1, 1933. They had brought to Maine their Manhattan Theatre Colony troupe. ..it became a success…they built a new, larger playhouse south of downtown which opened on July 17, 1937. Their original theater became a cinema, the Ogunquit Square Theatre.” No wonder, then, that the MGM agent graded the Ogunquit Square as in “Poor / Fair” condition: it was probably not in very good condition when it opened. So, it was an old garage converted to a live summer theater and then into a movie theater. As Robboehm points out, the Ogunquit Playhouse has never served as a movie theater, as far as I know.

So, now that Ron has clarified everything, I’ve uploaded the photo to which I referred as the Ogunquit Playhouse before it became Ogunquit Square. When you compare this photo with the street view you can see that the building to the left has hardly changed.