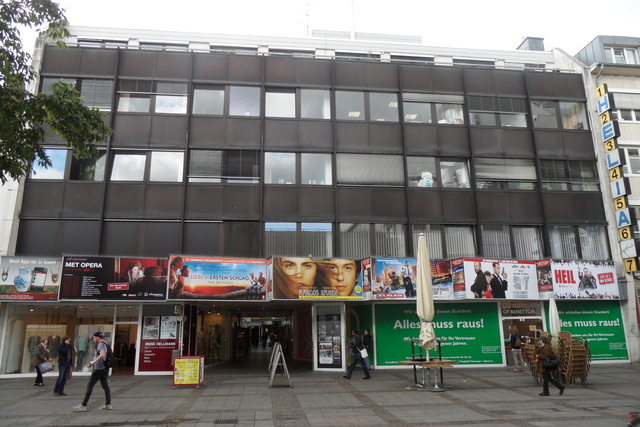 The Helia Kino is one of three cinemas, operated by Kinopolis under their Citydome brand, in a small shopping precinct in the centre of the town of Darmstadt. The Festival Kino mainly shows films in their original language, the Rex Kino is the ‘art-house’ cinema while the Helia Kino is the ‘mainstream’ multiplex.

Rather confusingly, the vintage exterior signage shows seven numbered screens. However, Screen 6 was taken out of service some years ago (due to problems with access/exit in the event of an emergency). To make up for this, above screen “7” the name of the “Festival” cinema has been inserted (where, perhaps, an “S” previously made the original cinema the “Helias”!).

The first Helia cinema was opened in 1927 and was operated by Palast Filmtheater. The Helia theatre contained one screen and 758 seats. It was demolished in World War II.

The second Helia single screen theatre was opened in 1951 and operated by Capitol Lichtspiele GmbH Rolf Theile. Since 1962 it was operated by Europa Lichtspiele KG Rolf Theile. The architect was Paul Bode. His office was located in Kassel. The B 8 projectors were by Bauer. The sound system was by Klangfilm. The auditorium was purple and yellow/gold with arround 764 seats. The cinema was demolished after 1973.

A 3rd Hella cinema was build with 3 screens. Later 4 screens were added. This Miniplex is still open.