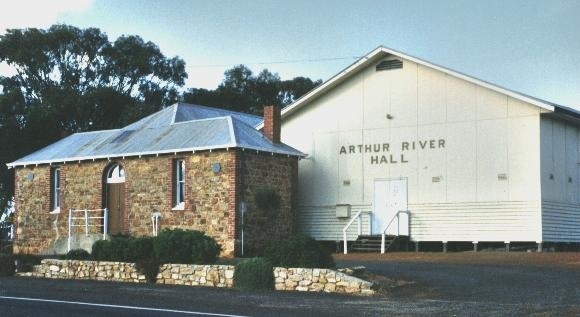 The original Arthur River Hall was built of stone with brick quoining and an iron roof in about 1890. It was 35' by 20', and in 1935/6 a T-section was added across the front, in similar stone. In the 1950’s, a new, larger hall was built of timber and cement sheet beside the old hall, which was then used as a kitchen and supper room. The Arthur River Hall was on Paddy Baker’s circuit; he stopped in many towns on severel routes, but one of his favorites was the one that ended with Arthur, Williams, Wandering, home(i.e., stopping in the towns of Arthur River, Williams, and Wandering, then home to Perth). The halls are still there, but no longer screen pictures.