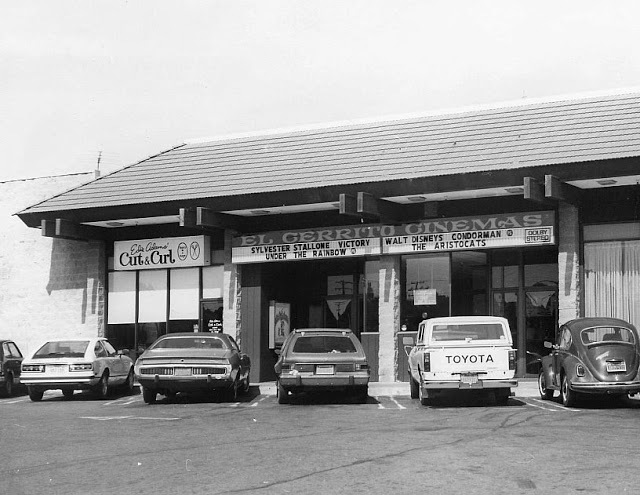 Located in a small shopping center at San Pablo Avenue and Moeser Lane, which was anchored by a Safeway and Payless stores. The Jerry Lewis Cinemas opened on August 2, 1972 with Raquel Welsh in “Hannie Caulder” & Shirley MacLaine in “The Possession of Joel Delaney” in screen 1 and Burt Reynolds in “Fuzz” & Sean Connery in “The Anderson Tapes” in screen 2. Each screen had around 400 seats. It was renamed El Cerrito Cinemas I & II on September 13, 1972. It was closed on April 3, 1973.

Some background info on this failed chain of theaters. http://cinelog.org/cinelog/2009/03/28/fantasy-failure-with-jerry-lewis-cinemas/

I remember going to a few movies here as a kid. I remember that it sat empty for some time. It reopened in the early 80s under new ownership and showed mostly late first run movies and some movies that were out maybe a year or two earlier. I don’t remember then name. I saw Bon Voyage, Charlie Brown there. After it closed it sat empty until the Safeway took over the space and expanded into it – especially adding an on-side bakery.

I found more info on it, and its second incarnation was called Moeser Lane Cinemas, and closed in 1982.

The Moeser Lane Shopping Center was announced in the Fall of 1970 which would be anchored by Value Giant Discount.Department Store and Safeway launching in 1971. The theater was at the intersection of Moeser Lane and San Pablo Avenue. The Safeway’s future neighbor would be the first of what the company reported as twenty JLC locations in Alameda and Contra Costa counties.

The only Jerry Lewis Twin Cinema launched ever in Alameda County opened August 2, 1972 with “Hannie Caulder” and “Possession of Joe Delaney” in Cinema #1 and “Fuzz” with “The Anderson Tapes" in Cinema #2. On September 13, 1972 it became the El Cerrito Cinema I & II. It went out of business on April 3, 1973 and the Lewis Circuit folded.

The theatre made a spectacular return on August 27, 1975 as the Moeser Lane Cinema I & II named for the shopping center that housed it with Rudy Ray Moore appearing in person to promote “Dolemite” which was supported by “TNT Jackson.” In Cinema II was “Escape to Witch Mountain” and “Son of Flubber.” The theatre closed September 30, 1976.

The theatre came back again with a $185,000 makeover by Associated Theaters Inc. which added Dolby Stereo and larger screens. Now called the El Cerrito Cinemas, it relaunched with “Excalibur” and “Alice in Wonderland” on June 26, 1981. But the investment didn’t pay out with the theatre going out of business within one year June 19, 1982 with a double-feature of “Death Trap” and “Wrong is Right” on Cinema I and “Some Kind of Hero” and “Fighting Back” on Cinema II. Sadly, after four operators, the El Cerrito Cinemas did not come fighting back again. It was chopped up into two retail operations – one of which was a laundromat.