Town and Country Drive-In I & II 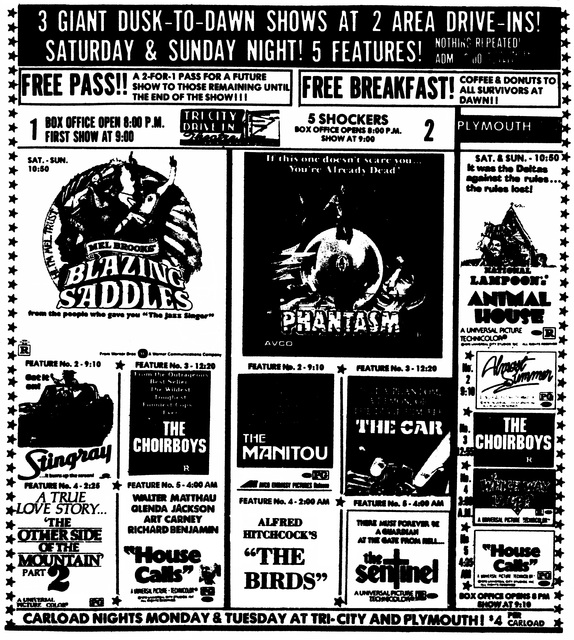 The Tri-City Drive-In opened on June 15, 1949, screening the 1948 action movie “Whispering Smith” with Alan Ladd, Robert Preston and Brenda Marshall. In addition it featured Tom and Jerry color cartoons. The Tri-City Drive-In was opened by the Bucyrus Outdoor Theatre Corp. Officers are Wade Kimerline, Bud Yingst and Gertrude Abrahams. The Board of Directors/stockholders are Wilbur Lutz, Stan Acree, Dale Welling, E. P. Weithman, Clarence Bailey, Joseph Neff, Victor Vollrath, Frank Nolan and Doyle Jacobs. Jacobs was the theatre manager also. The drive-in was built at a cost of $125,000 and featured a 50 ft. x 67 ft. wide screen tower. It had a car capacity of 660 cars with in-a-car speakers. In March of 1963, Olen Martin Jr. bought out the remaining stock from the other shareholders and is now president/owner of Bucyrus Outdoor Theatre. Martin had been the drive-in theatre manager since 1951.

The Bucyrus Outdoor Theatre Corp. in June of 1974 took over the operation/ownership of the Plymouth Drive-In located in Plymouth, Ohio, from Edward Ramsey. The Tri-City Drive-In was twinned on September 3, 1976. Martin finally closed the Plymouth Drive-In in 1981 and the drive-in was returned back to the Ramsey family.

The Tri-City Twin Drive-In finally closed at the end of season on 1982. In 1983 the bank foreclosed on the property and it was resold to Alan Teicher (dba Teicher Theatres). It was reopened by Teicher Theatres on July 7, 1983, for the season. When drive-in opened for the 1984 season he renamed the drive-in the Town and Country Drive-In I & II. The Town and Country I & II finally closed on August 10, 1986. The property was resold and now is a salvage yard.

Google Aerial view and the Google Street view from September of 2015 shows that the second screen at the southeast corner of the property is still standing. It would also appear that the original projection booth/concession stand has been repurposed.

The Town & Country appears to have closed on August 10, 1986 with double-features of “Club Paradise” and “Wildcats” on one screen and “Ruthless People” and “Down and Out in Beverly Hills” on the other.