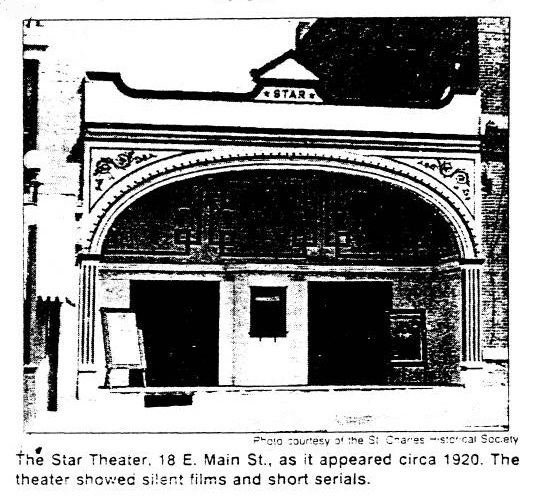 The Star Theater was open prior to 1916. It was later renamed Strand Theatre and closed around 1925.

The purchase of the Star Theatre in St. Charles, Illinois, by Robert Kremer of Geneva, Illinois, where he operated a house called the Grand Theatre, was noted in the July 8, 1916, issue of The Moving Picture World. Kremer formed a partnership with W. J. Bryant, who would manage both the Star and another St. Charles house, the Idle Hour Theatre.

A later owner renamed the house the Strand Theatre, and it was closed and dismantled in 1925, according to this brief item posted at Geneology.com:

“St. Charles (Illinois) Chronicle, Feb. 5, 1925, Strand Theatre Being Torn Out For Store Bldg. While interested in the many fine changes going on along Main street, it is well to note that John Gartner is dismantling the old Star or Strand theatre adjoining his business place. The old picture house is being made over into a place for business. Mr. Gartner states he has made no arrangements as yet for a tenant, but will do so later.”

The Strand and Idle Hour Theatres are listed in the Moving Picture Theatres section of the 1921 Cahn Guide, each with 500 seats and both operated by B. J. Vought.