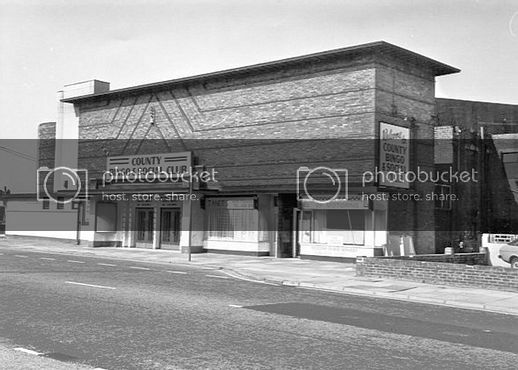 Located in Reddish in the east of Greater Manchester, two miles north of Stockport. The County Cinema was built for the Jackson & Newport chain and was designed in a Streamline Moderne style by architect Henry F. Elder. It was opened on 28th March 1938 with Binkie Stuart in “The Rose of Tralee”. Seating was provided for 1,080 in the stalls and 238 in the circle. It was equipped with a Western Electric(WE) sound system.

It was taken over by the Newcastle based Essoldo circuit in August 1950 and was re-named Essoldo in September 1951. The Essoldo was closed on 15th March 1969 with Yul Brynner in “The Magnificent Seven” & Yul Brynner in “Return of the Seven”. It was converted into a bingo club named County Bingo Club. It closed as the Apollo Bingo Club late-1995. It has been demolished and housing has been built on the site.