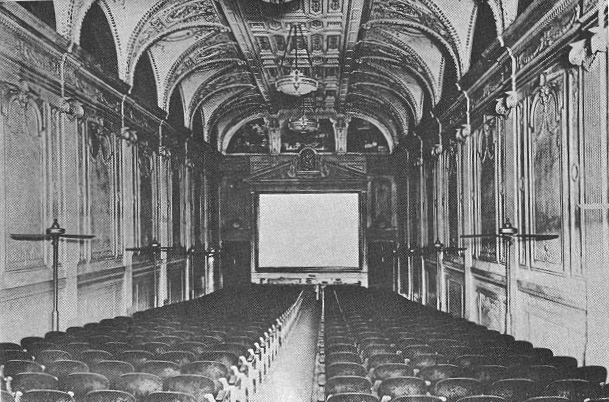 Josiah Pearce & Sons' Trianon Theatre cost $100,00 to build in 1911. It was the fifth theatre in the Pearce circuit, and their most ambitious project. The Trianon Theatre was opened January 15, 1912. It was equipped with a Moller Opus organ and the music motif inside the theatre featured painted scenes of Louisiana by an artist named Drysdale and a screen mural entitled ‘Music’, the work of an artist named Thomas of New York.

In the store-show era of movie exhibition, Josiah Pearce & Sons' Pearce’s Theatre Circuit was a leader in New Orleans and Monroe, LA as well. With the two store-show theatres on St. Charles Street (the Bijou Dream Theatre at 117 St. Charles and Dreamland at 316 St. Charles) and two more on Canal St with the Grand Theatre (1033 Canal) and the Electric Theatre (926 Canal), Pearce seem well-situated until larger competitive theaters came along. Pearce answered with its first true modern movie palace with the Trianon encompassing 814-816 Canal Street. A year later, Pearce added the Tudor Theatre at 610 Canal which opened in June of 1913. Pearce would shutter his show-stores leaving the Pearce New Orleans portfolio as the Trianon and the Tudor Theatre at 610 Canal which opened in June of 1913.

But the Pearce Circuit was under duress especially from the Saneger Circuit which would acquire both the Tudor and Trianon. Though the Trianon had good times under Saenger, the circuit got even more aggressive building movie palaces including the Saenger Theatre which rendered the Trianon fairly useless and certainly outdated. It would be dropped and the theater’s auditorium eventually demolished.