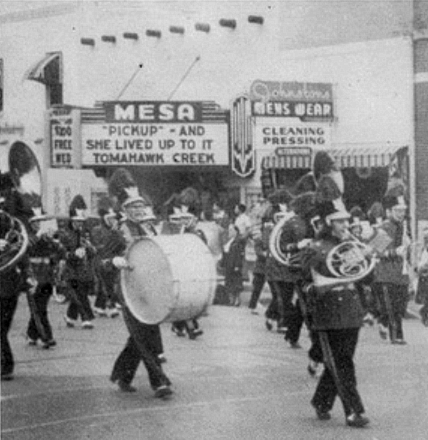 A conversion of former retail space, the Mesa Theatre was opened on September 15, 1935. Listed as seating 475 in the Film Daily Yearbook of 1955.

This could have been the Mesa’s predecessor, or not.

“The Princess theater at La Junta has been leased by E. M. Role, who will conduct it as a five-cent theater.” – Motography, April 1911

On second thought, this note from the Sept. 7, 1935 Motion Picture Daily sounds more like the birth of the Mesa, since the seating number is close:

“La Junta, Col., Sept. 6. — A new theatre remodeled from a store building will be opened here Sept. 15 with Crawford Brothers of Oklahoma as operators. It will seat 450. Fox has two houses here, but one of them is closed.”

A note in the Sept. 23, 1935 Motion Picture Daily said that the Fox was reseating the Elk in La Junta, and it was to reopen soon.

Boxoffice, May 2, 1953: “LA JUNTA, COLO. – The Mesa Theatre here has been sold to Basil Smith, owner of the La Junta Drive-In. Harold Rice, Fox Intermountain district manager, said the sale was made in compliance with the consent decree. The Mesa is the newest theatre here, opened in 1950.”