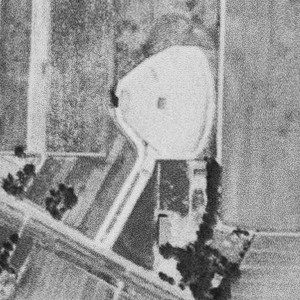 The Starlight Drive-In was opened on March 26, 1953 with June Allyson in “The Girl in White”. It was operated by by Server & Downing. Later taken over by Gibralter Enterprises Inc. and finally on June 22, 1962 by Commonwealth Theatres, it was closed on September 26, 1976 when the screen tower was destroyed.

Found it! The drive-in was located at 28939 County Road 20.5, Rocky Ford, CO. on the east side of the town. Today, the entrance area is occupied by an industrial park, but the actual drive-in location in the back is fairly empty with no trace save for the general outline. http://tinyurl.com/ortzu4l

The Starlite’s first appearance in the Theatre Catalog was the 1953-54 edition, capacity 400, owners Sever and Downing.

In August 1952, trade publications wrote that “Sever, Downing and Sever” were building a drive-in, which one said was going to be named the Valley. But the first true opening announcement was in the April 4, 1953 Motion Picture Herald: “Carl Downing and A. C. Silver (sic) have opened their new Starlite drive-in, Rocky Ford, Colo.”

The date when Gibralter, a loose confederation of independent regional owners, bought the Starlite is still fuzzy, but Commonwealth bought it from Gibralter effective June 22, 1962, based on an article in the July 2, 1962 issue of Boxoffice.

Based on its ads and stories in the Rocky Ford Daily Gazette-Topic, The Starlite held its grand opening on Thursday, March 26, 1953, with all ticket sales going to the Pioneer Memorial Hospital Fund. (They raised $245.70.) The first program was “The Girl in White” with short subjects “Thar She Blows,” “Fly Thru the Air,” and “Little Wise-Quacker.” The owners were listed as A. C. Sever, Carl Downing, and S. A. Sever.

Considering the Motion Picture Almanac dates above, this was probably the end. Boxoffice, April 18, 1977: “Erratic weather patterns created a dust storm with high winds which destroyed the screen tower of the Starlite Drive-In, Rocky Ford, and partially destroyed the tower in the LaJunta Drive-In.”

The Starlight’s final ad before its screen tower was destroyed was in the Sept. 24, 1976 issue of the Rocky Ford Daily Gazette. Since that ad didn’t specify which days the shows would run, my guess for its final night would be Sunday, Sept. 26. The program was “Born to Kill” and “Jackson County Jail”.

A quick check of the July 11, 1977 Daily Gazette showed ads for indoor theaters (the Grand and the Fox), and the La Junta drive-in (which must have repaired its screen), but not the Starlight.