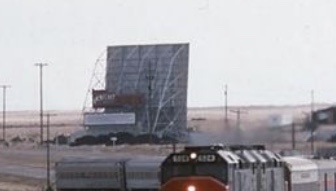 The La Junta Drive-In was opened on September 22, 1948 with Sidney Greenstreet in “That Way About Women” & John Wayne in “Angel and the Badman”. It was operated by C. Alderson & J. Barton. It originally had a capacity for 350 cars. By 1952 it was operated by Basil Smith and capacity had increased to 550 cars.

I’ve been told that the snackbar and a couple screen tower footings remain and that the site is now occupied by MAKCO Pipe Steel. It was still open in 1966.

LA JUNTA, COLO. – Basil L. Smith, former owner of a grocery market here, has purchased J. W. Barton’s interest in the La Junta Drive-In. The airer, located one mile and a half east of town on Highway 50, has a capacity of 350 cars, and was recently opened for the season. Dr. C. M. Alderson of Dodge City, Kas. will continue as the other partner.

The La Junta’s first appearance in the Film Daily Year Book drive-in list was the 1949 edition, and it stayed there through at least 1966.

The Motion Picture Almanac had the same info in its first drive-in list (1950-51) as the 1949-50 Catalog. Unlike the Catalog series, it kept that owner info through the 1953-54 MPA. In 1955, that changed to Basil Smith & C. M. Alderson. That info continued through 1966, then the La Junta was listed as a 350-car drive-in through 1976. When the MPA rebooted its drive-in list for 1977, it noticed that Commonwealth now owned the La Junta. The drive-in fell off the drive-in list in 1985, though Commonwealth’s circuit listings didn’t drop the La Junta till 1986.

“The 40 boys in the Koshare Boy Scouts, La Junta, Colo., decided to go to the La Junta Drive-In following one of their evening meetings. And they all went for $1, since it was ”$1 night,“ and any car was admitted regardless of the number of occupants. They went in their bus.” – The Exhibitor, July 8, 1953

“LA JUNTA, COLO. — Construction of the new 350-car drive-in being erected on route 50, two miles east of here, is expected to be completed by September 1, according to J. W. Barton and C. M. Alderson, who will operate the ozoner. A steel tower is being erected to support a 60x54-foot screen. A building housing the projection booth and a snack bar is nearing completion. A staff of ten persons will be employed.” – Boxoffice, Aug. 21, 1948

“LA JUNTA, COLO. — The management of drive-in theatres in Dodge City and Garden City, Kas., has announced plans for building an ozoner here. Glen A. Cooper of Dodge City, associated with Wade Renick of Garden City, said the ozoner probably would be located on the highway west of La Junta. The capacity would be 350-cars. Renick and Cooper said they hoped to get the showcase in operation by fall.” – Boxoffice, Aug. 28, 1948 (I haven’t seen any evidence that this one ever got built.)

Barton & Alderson’s La Junta Drive-In opened on Sept. 22, 1948 based on stories and ads in the La Junta Tribune-Democrat. When it opened, it had a 56x54-foot screen and a 350-car capacity. The program on Opening Night was “That Way About Women” with Sidney Greenstreet, “Angel and the Badman” starring John Wayne, plus selected shorts.

There does appear to be one screen tower footing left. As for the concession stand/projector booth, it either has been remodeled or torn down and rebuilt because it is not the same shape that it was when the drive-in was in operation. Nor does it have the familiar small windows designed just for the projectors.