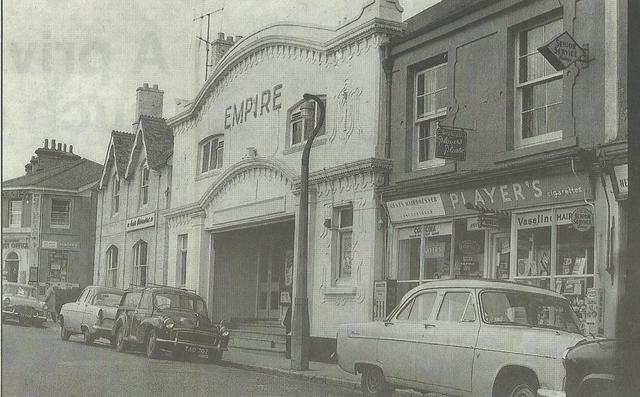 In the English Riviera resort of Torquay, in the county of Devon, the Empire Cinema opened in the Ellacombe suburb in 1912 or 1913. It had been built by Mr R. Tucker. A pianist accompanied the silent films, but, on at least one special occasion, in this case the screening of “Dick Turpin’s Ride to York” (1922), part of the story was told by actors on the stage, joined by a full grown horse!

In the early days, the extreme poverty of the area is shown by the fact that, on Saturdays, the first two rows were reserved for children without shoes.

By 1915 the Empire Cinema was leased to Charlie Poole. Between 1916 and 1920 it went by the name of Cinedrome, reverting to Empire afterwards.

It was the first of the town’s cinemas to show ‘talkies’, the first being “Broadway Melody”, starring Charles King and Anita Page.

By the 1940 Kinematograph Year Book, the owner was the W. E. Willis Circuit.

The Empire Cinema closed in 1959, only to re-open briefly, between 1962 and 1963, as the Continental Cinema, showing adult fare such as “Loving” and “Innocent Sorcerers”.

In 1963 Lionel Digby bought the lease and re-opened the building as the Empire Ballroom. However, he was unable to acquire a liquor licence and had to struggle on with just soft drinks. He tried to cover his costs with some wrestling and bingo but fairly soon, in the mid-1960’s, he sold the lease on to Jurgen Etheridge and John Portley, who opened Torquay’s first disco in the building.

In succession it became the Scotch Club, Tiffs in Town, Tiffs Club and then Monroes, which struggled on until 2003 when this too closed (there had been complaints from nearby residents about the noise).

The building was demolished in 2004-2005. An application had been granted for flats to be erected on the site.