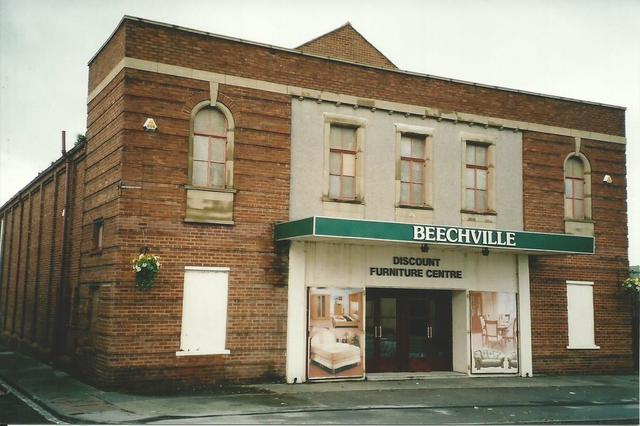 In Sacriston, near Durham, the town’s first two cinemas were the Victoria Picture Hall and the Theatre Royal. Both opened in 1921.

The Victoria Picture Hall, which burned down in 1941, stood behind the Post Office on the eastern side of Front Street. It had been built as a concert hall in 1897.

The Theatre Royal cinema, in Church Street, closed in 1931 but reopened for a short time in the 1950’s. It’s fate after then is not known. (see separate entry on Cinema Treasures)

The town’s first purpose-built cinema, appropriately called the New Cinema, did not come into being until 1957. Designed by architect C. Lowes, it opened 30th September 1957 with Yul Brynner in “Anastasia”. Unfortunately its timing was all wrong, and it became a bingo hall from 1962.

By the time I visited, in October 2005, the building was home to Beechville Discount Furniture Centre, which continued until at least December 2015. In 2016 it became a Heron Supermarket.

Further information has come to light about this cinema. When I wrote the above overview I was surprised that it appeared that this building had not been erected until 1957. Well, it hadn’t been! I don’t know when it was built, but it wasn’t purpose-built for films, as it started life in the 1910s or 1920s as a skating rink, before becoming a theatre and even showing films, from 1924 to 1929, before becoming a dance hall until 1952. That use ceased after a few years, and the New Cinema opened in 1957.

The building is now home to a Heron Foods supermarket.

More information on the New: the exact opening date was 30 September 1957 and the opening film was Anastasia. It was an 800 seater.