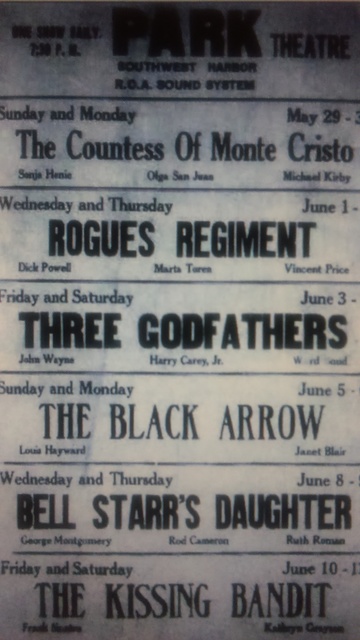 The Park Theatre opened in 1919 in Southwest Harbor on Mt. Desert Island. It was located on Main Street at Clark Point Road. It may have been a summer-only operation, but I’m not sure of that. After closing, it became a store. It was demolished in 2008.

The Theatre Historical Society on-line archive has the MGM Theatre Report for the Park; it’s Card # 447. But no one filled it out, so there is no information, only an undated exterior photo probably taken sometime between 1946 and 1951.

Remember the theater in 1976, located on the corner of Main Street and Clark Point Road. The building was “L” shaped, with the smaller side on Clark Point Road, and had an appliance store. The theater itself was parallel to Main Street with the entrance just before the corner. After its closure, the building was turned into 3 retail spaces. The largest occupied the corner and Clark Point Road sections. 2 smaller retail spaces were along Main Street and in the 80’s were occupied by a Health Food Store in the center, and an arcade / Ice cream parlor known as “The Game Room”. (Which was owned by my father). When installing some counter seats that bolted through the floor, I observed that the original stage area was still intact under the new floor installed above, including the sloping floor and seats that had been removed and stacked in the space. There were also several items from the concession stand to include crates of empty coke, tab, and other soda bottles. 2 store rooms still remained in back with writing on the walls about movies and schedules.The false ceiling covered the location of the screen and extended up about 20 feet, but the screen and curtain equipment had been completely removed The health food store closed and was absorbed into the hardware store. In 1985 the Game Room closed, at which time the entire building became the Hardware store.

The original building was torn down and replaced by the owners sometime in 2008, with a new structure semi-resembling the former theater but in a “T” formation and a level roofline instead of the original roofline with the extended area of the former screen location.

I saw Julia, starring Jane Fonda, at the Park with my mother in the summer of 1978.