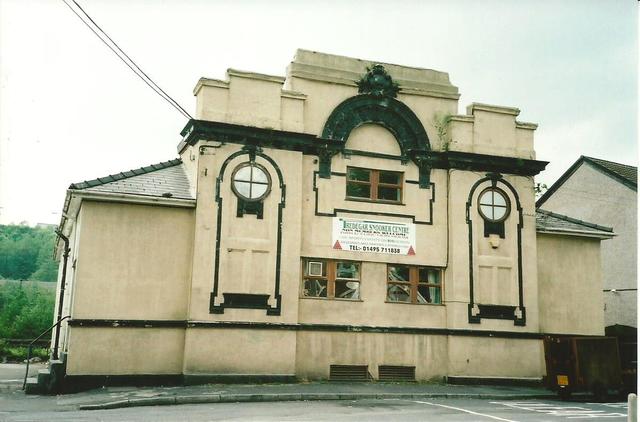 When I visited Tredegar, Cardiganshire, in May 2008, I called in at the public library. While I was talking to a member of staff, a local resident came over and told me that this building had once been the Palace Cinema.

Unfortunately, it is not listed in the Kinematograph Year Books.

Research on the internet suggests that this might have been built as a live theatre, the Palace of Varieties (possibly with bioscope shows interspersed among the variety turns). However, it was regarded as a ‘failed’ theatre, and it soon began trading as the Palace Cinema (see 1920’s photograph, captioned “Palace Cinema”) before, in the depression of the 1930’s, the Tredegar Medical Aid Society converted it into a medical facility, including consulting rooms, a treatment room and waiting area. (Established in 1890, this Society inspired Aneurin Bevan to champion the National Health Service.)

It is not known when this use ended. However, by the time I visited, the building was home to Tredegar Snooker Centre.

Hopefully another contributor will be able to provide a more definitive history.

There is a PALACE listed in the 1948 KYB, under New Tredegar, together with the EMPIRE, however, no other detail is given other than the name..