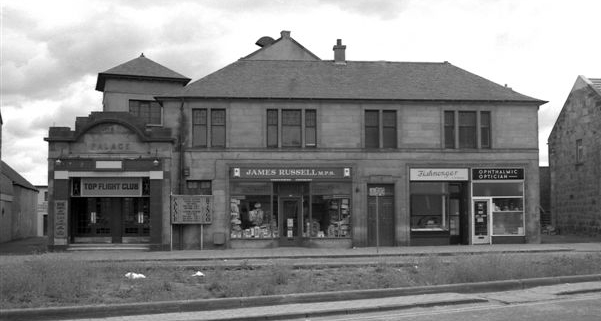 In Larbert, Stirlingshire, the Picture Palace was not listed in the 1914 Kinematograph Year Book (KYB), but it was in the 1927 edition. At that time, it was owned by J. H. Faulkner and managed by T. Gilbert. The auditorium was built behind two shops, which had flats above. The cinema entrance was to the left of the shops. By 1931 it was listed as the Picture House.

By the 1953 edition, ownership had transferred to Fife Entertainments Ltd., the cinema had been renamed the Palace Cinema and the seating capacity had increased to 800.

The Palace Cinema was still open in 1966, but it is not known when it closed. However, it was the Top Flight bingo club by 1985.

More recently, the entrance and auditorium have been demolished, but the shops remain. Flats have been built on the site of the auditorium.