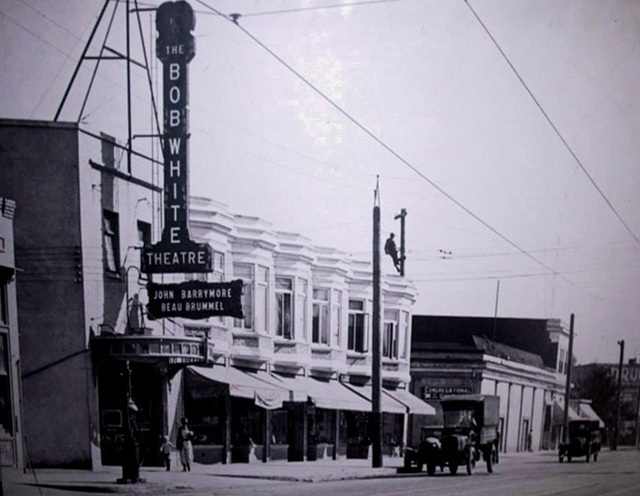 This theatre was located in the southeast section of Portland and was opened around January 1924.

“This theatre is so memorable because Russ Meyer films played there when I was a kid and my mother put her hand over my eyes when we drove by because the title on the marque was so lurid”.

Wow. I am excited to see all the posts here. As someone who is looking very short term to purchase a movie theatre in Portland to re-open with a pretty grand plan, I like what I have heard about this theatre and may have to look into it more. I am currently pursuing the Eastgate with the intent to buy it back from the Russian Church. We’ll see.

The Bob White Theater was my neighborhood theater. I remember the flury of 3D movies seen there in 1953. Remember it being sold out for Disney’s The Vanishing Prairie with Bear Country. Around the corner,for just a few months beginning in 1912 was the Brownie Theater as shown in the book Theaters of Portland. Even today you can see the projection booth extension to the back of the building.

I’ve been trying desperately to find out how to contact Dale M Haskin, who still owns the property according to the city of Portland. If anybody has any idea how I can get in touch with him I’d greatly appreciate the information.

I was talking recently about the Bob White with an organ enthusiast friend. He said that the live-in owner died and that most if not all of the organ had weathered badly.. Call him, Stan Clarke,at 503-253-9886. Also, the for sale sign says contact Michael Tharp or Ross Connor at 503-223-7181. Hope this wil help.

I’m sorry, but Dale Haskin has been dead for more than a year. If the city records don’t reflect that, it’s probably just because the property is still in probate or something. People I’ve talked to told me that his daughter inherited it and has been trying to sell for quite a while — at least since March 2010.

The building is a great property, but apparently it needs a lot of work, including a new roof. As Alan Patterson said, the organ is supposedly not in good shape.

I owned this theatre in the mid-sixties. It and I were written up in Boxoffice magazine because of the programming I initiated. It was all country music. The first picture was “Your Cheating Heart” with George Hamilton as Hank Williams. It packed the place out. I was also written up in the local IA paper for giving my union projectionist a raise without the union having to ask for it.

The theatre has been purchased by a Portland businessman who is working on reopening it. I have the unique privilege of advising him. I believe it will be the beginning of revitalizing the Foster-Powell section of SE Portland.

Here is some good info on what is planned,

The June 14, 1924 issue of Moving Picture World said that the Bob White Theatre, which had then been open for about six months, had been designed by Portland architect Lee Thomas. While the article does not mention Albert Mercier, he and Thomas were partners at this time, and collaborated on several other theater projects.