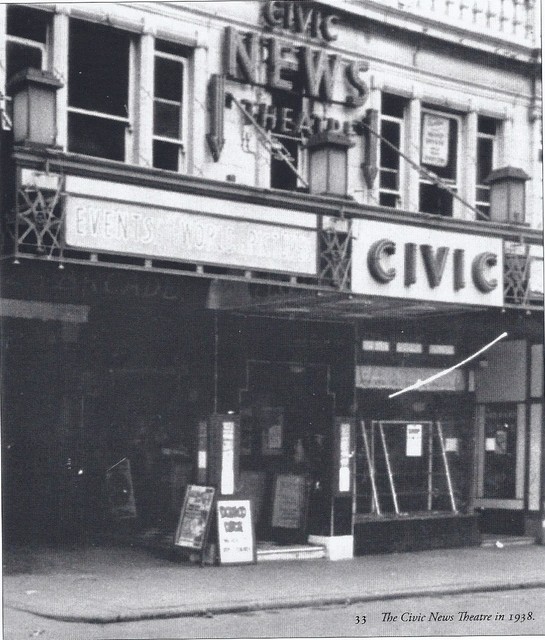 In Southend-on-Sea, Essex, the Talza Arcade had been built in the mid-1920’s in Southchurch Road, at the junction with High Street, opposite the Hippodrome Theatre. Incorporated into the complex, above shops, on the first floor, was the Talza Hall, used for dancing, catering and various functions.

During 1932 an application for a theatre licence was approved by the council. The Talza Hall Theatre opened on 17th October 1932 with a vaudeville show performed by the Concord Follies. In March 1933 variety was replaced by repertory theatre, the first production being “It Pays to Advertise”.

The flat floor and limited stage area caused difficulties and in early-1934 a raked floor was installed. The theatre re-opened on 16th April that year as the Talza Theatre.

The Talza Theatre closed on 9th October 1937 with “Musical Cheers”. The hall was turned into a cinema, re-opening on 1st March 1938 as the Civic News Theatre, with a seating capacity of 300. The lessee was News Cinemas (Southend) Ltd., whose managing director was Jackson Hartley. Adjoining the new cinema were a parcel room and a writing room. The cinema produced its own newsreels, showcasing local events and personalities.

On 1st July 1950 the cinema closed. After repairs and renovation it re-opened as the New Vic Cinema on 29th October. The new name was chosen so some of the existing letters could be reused! The seating capacity was reduced to 292.

The cinema closed on 9th April 1955 for decoration. It re-opened on 18th April as the Continental Cinema and with a new manager. George Mann considered that there was a large audience in the town for continental films, but this did not prove to be the case, and the cinema closed again, on 12th June 1955.

It did not re-open until 19th April 1956, having reverted to its earlier name of the New Vic Cinema, showing family programmes.

Later in the 1950’s continental films were tried again, but without success and the cinema closed for good on 26th September 1959, with “The Strange Desire of Monsieur Bard” starring Michel Simon, and Pierre Fresnay in “The Aristocrats”.

The hall became a strip club, then a Chinese restaurant.

In 1965 the whole Talza complex was demolished to make way for the Hammerson shopping development, now known as the Victoria Plaza.