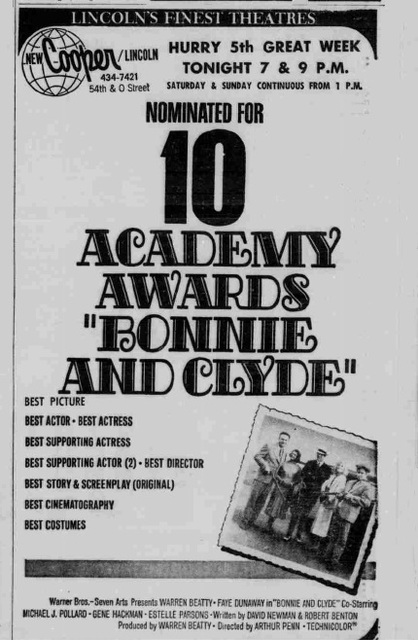 When Cooper Foundation Theatres opened their 13th Midwest theatre on May 25, 1967, the Lincoln Journal Star noted that it was the first new indoor theatre constructed in Lincoln since 1929. Alfred Schulter of the Stuart Theatre moved over to manage Lincoln’s first suburban theatre and its premiere attraction, “The Sound of Music".

Co-designed by Mel C. Glatz and Dunbar & Dunn, the 810-seat Cooper Lincoln Theatre had a large upward swooping canopy in front, covering the drop off area. It was said “The curved screen theatre and projection equipment has been designed to accommodate all large screen processes now in use and those anticipated for the future". The theatre was equipped with Norelco projectors positioned on the same level as the screen, 90-feet away, to eliminate distortion. Considering that the auditorium was only 60-feet wide, this made the curved screen much smaller than the Indian Hills Theatre screen in Omaha at 110-feet wide. Providing the sound were five main stereophonic speakers behind the screen and eight in the ceiling.

The first advertised Super Panavision film to play at the Cooper was “Grand Prix", which ran for four weeks in November and December 1967. This followed the Indian Hills engagement, which was advertised as Cinerama (with the full logo).

The Cooper Foundation, a non-profit charitable concern, was presided over by Elwood N. Thompson and was established in 1934 by the late Joseph H. Cooper. Its other theaters in Lincoln were the Varsity Theatre and Stuart Theatre. Outside of Lincoln were locations in Omaha, Minneapolis, Oklahoma City, St. Louis, Denver, Greeley and Colorado Springs.

Later operators include Cooper-Highland Theatres in 1975, Commonwealth Theaters in 1978 and United Artists Theatres in 1987. According to the Lincoln Journal Star, a lease dispute between United Artists and its landlord led to the closing of the theatre on November 29, 1992. Its last film was “A River Runs Through It".

From 1993 to 2000 the former Cooper Lincoln Theatre was home to the Guitars & Cadillacs nightclub. The theatre was demolished in October 2009 and Cheddars Restaurant opened on the site in 2012.