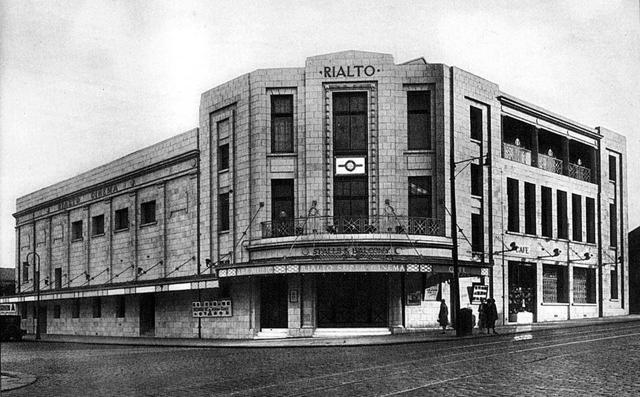 Located in Rochdale, Lancashire. The Rialto Super Cinema was opened on 25th August 1928 with a special charity matinee performance. It was opened to the public on 27th August 1928 with Rochdale native Gracie Fields attending ‘in person’. The opening film was “Dawn” starring Sybil Thorndike. It was designed by architect J.M. Calder of the architectural firm Butterworth & Duncan. The façade was covered with cream faience tiles. The foyer had a Sicilian marble floor and Manu marble lined walls. Inside the auditorium seating was provided for 1,232 in the stalls and 600 in the circle. At the rear of the circle were four private boxes with a total of 16 seats. The interior decoration was in pale blue and cream, with decorative details picked out in gold. On the auditorium sidewalls were painted panels of English scenes and flowers, with two panels depicting local beauty spot Healey Dell, all the work of artists F.A. Foster & E.A. Payne. The proscenium was 32ft wide and there was a fully equipped stage with dressing rooms for artistes. The cinema had a café, which was decorated with scenes of the Rialto Bridge, St. Marks and other Venice scenes. At the rear of the building was a free car park.

Around 1929 it was equipped with a Western Electric(WE) sound system. The Rialto Cinema was equipped with CinemaScope in 1955. It was taken over by the Gaumont British chain on 27th July 1957, and became part of the Circuits Management Association(CMA) soon to be the Rank Organisation. It was re-named Odeon on 17th August 1959.

The Rank Organisation announced that the Odeon would close on 15th November 1975, but fate stepped in and it was not be on that date. On 1st November 1975, a group of unruly youths threw fireworks inside the auditorium during a screening of “The Apple Dumpling Gang”, and set alight the stage drapes and screen. The Odeon never re-opened. The building was demolished in the mid-1980’s and a MFI hardware store was built on the site. This operated until the early-2000’s and was demolished and since September 2010 the land has been in use as a car park.

Nearest postcode is OL16 1UA, and yes, it’s still a vacant plot being used as a car park.