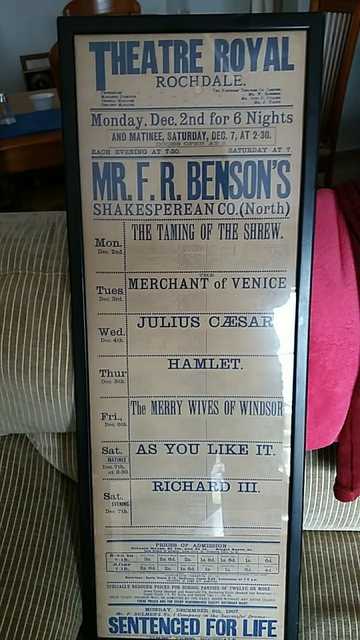 Located in Rochdale, Lancashire. The Prince of Wales Theatre was opened in 1897. In 1883 it was re-named Theatre Royal & Opera House. Alterations were made in 1889 to the plans of noted theatre architect Frank Matcham and the theatre was operated by Frederick William Purcell who operated the Theatre Royal, Bury and the Grand Theatre, Derby. It was destroyed by a fire on 27th January 1894, which left only the four walls standing. It was rebuilt to the plans of Frank Matcham and reopened 4th March 1895.

Seating was provided for 192 in the stalls, 293 in the pit stalls, 104 in the dress circle, 180 in the grand circle 160 in the upper circle and 218 in the gallery. There were 10 boxes. The proscenium was 27ft wide and the stage 34ft deep. There were six dressing rooms and three chorus rooms. The Theatre Royal was later taken over by the Halifax based Northern Theatres Co. Ltd. It was equipped to screen films by 1909.

The Theatre Royal presented plays, both dramatic & light, variety & revues and had an annual pantomime at Christmas. It was destroyed by a fire on night of 24th November 1954. A variety bill headed by Tessie O'Shea and pianist Semprini was being staged that week.