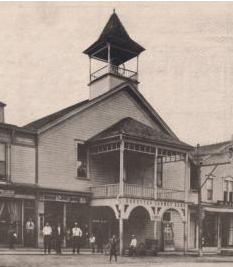 Built in 1855, DeRuyter’s Union Hall was used as a meeting place and live performance venue, also served as the town’s movie theater, regularly showing films from the early days of silents up until its destruction by fire on December 31, 1946. Located on the south side of Cortland Street, it apparently went by the designation Union Hall Theater in the 1920’s, before reverting to its original name.