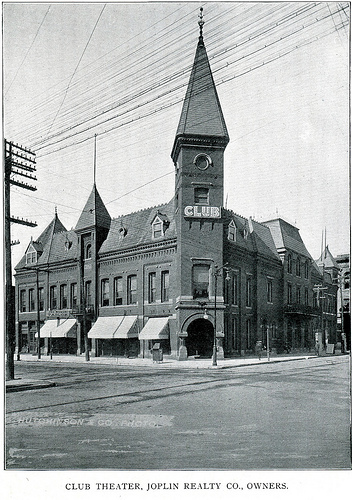 The Joplin Globe notes that the Club Theatre opened on January 26, 1891, in the Joplin Club, which was formed by civic leaders. After a 1902 renovation it became the New Club Theatre.

After serving as a vaudeville and playhouse, notices for moving pictures at the Club Theatre began to appear in the Globe in 1910. In September 1917 it was remodeled again and began to offer Pantages Vaudeville and Fox films. On December 12, 1918, fire destroyed the theatre portion of the building, which was never rebuilt.

The remainder of the building, which later housed businesses, was razed in May 2002 to make way for a parking lot. The Joplin Historical Society saved the arched stone entrance, which was covered over in the 1980’s.

Here are a couple of relevant posts (with illustrations) from the web site Historic Joplin: