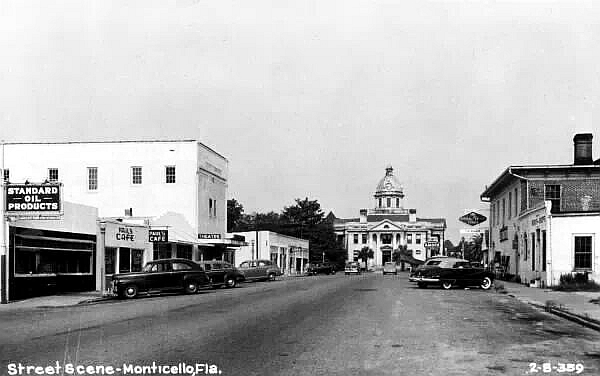 The Catherine Theatre was opened in 1915 and was upstairs in a Masonic Lodge building. It was closed in 1940 and the building was destroyed by fire in 1945. It was rebuilt as the Jefferson Theatre, which shows up in a black and white postcard image, as a rectangular, simple structure, about a half block up from the town square. It clearly does not match the structure of the 19th Century brick Opera House which is also listed for Monticello. The Film Daily Yearbook for 1947 lists it as having 500 seats. It was still open in 1950.

The building which housed the Jefferson Theatre was constructed in 1914. It had two levels. Upstairs was a Masonic lodge. The original function of the ground floor is, at present, unknown, but the theatre opened on that level in the 1920s. At the time of the theatre’s opening, it was named the Catherine, after Catherine Johnson, the daughter of the operator. During its early years of exhibition, the theatre experienced two fires, both caused by nitrate film igniting. After one of these fires, concrete was poured to increase the structural resilience of the theatre’s siding. The theatre had a balcony, which was provided for African-American patrons. They had to use a separate entrance, which was located along the right side of the building. Near this side entrance, a drinking fountain and bathroom were located, for their use. However, if these patrons wanted snacks to eat during the show, they had to pay for these at the ticket window, and then a staff member would go and get the requested items, and hand them to the patron. The year of the Catherine’s last significant remodeling was 1938. The theatre first closed in 1940. In 1950, the theatre reopened with a new name, Jefferson, and continued to operate until the late 1960s. After a few years of closure, the Jefferson reopened in the early 1970s, but then closed some years later, for the final time. After the Masons had moved to new quarters in another building, the Masonic lodge upstairs was converted into a condominium for the Morris family, including a room which was provided with bunk beds for use when child relatives came to visit. It was in this condominium that Sharon Morris—source of much of this information—grew up. The next owner of the building still lives up there. The ground floor has been completely remodeled into offices for an investment firm. Framed reprints of classic movie posters adorn the walls, giving a clue to the building’s former use.*************The preceding information was furnished to this writer by Monticello resident and film historian, Ed Hurley, who gleaned much of it from Sharon Morris, granddaughter of the Jefferson’s owner during the 1970s. Additional information comes from Monticello historian, Dee Count.

A few more details, provided by Jack Tillmany: In the classified ads of Motion Picture World, October 30, 1915, there is one for a “fully equipped” movie theatre in Monticello, six months old, expenses $50, receipts $90-$100 per week, long lease. “Act quick,” heralds the ad. Julius D. Sampson is listed as the contact. Seating capacity is given as 260. It is later listed as being taken over by J. M. Johnson, and named Katherine by that time. So clearly, the lower floor functioned as a theatre from the start, in 1915, and perhaps got the Catherine name a little later. Catherine is listed as the operator, c. 1940. According to trade publication listings in Jack Tillmany’s collection, it was S. K. Stratos who renamed it the Jefferson. A June 1945 Film Daily magazine reports that it was “recently destroyed by fire” and “will be rebuilt.” This may be the time of the pouring of the new concrete walls remembered by locals, and included in the preceding post. Presumably it got its 500 seat capacity at that time.

A short paragraph from an early theatre operators' trade magazine shows the name of the theatre as Katherine, not Catherine.