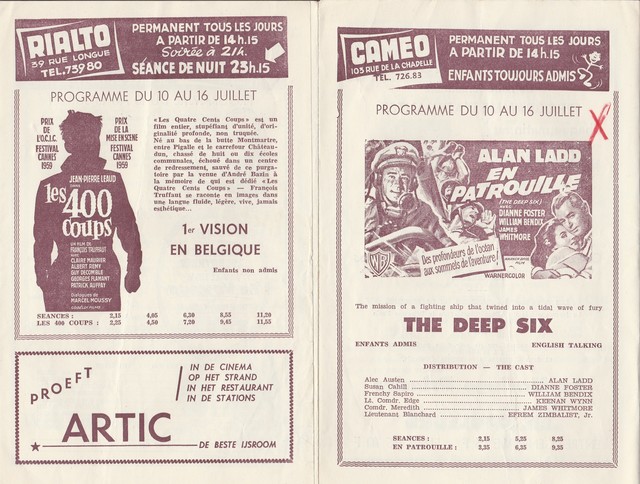 The Rialto Cinema opened on 6th July 1928 with Josephine Baker in “La Siren des Tropiques”. Seating was provided for 1,100 in orchestra and balcony levels. The building also contained the Casanova dancing class and the restaurant La Belle Meuniere. On 20th December 1929 the Rialto Cinema showed the first talking movie in Ostend when it was equipped with a Western Electric sound system and screened Al Jolson in “The Jazz Singer”. In 1933 the Casanova dance hall was converted into the Casanova Cinema, which opened 20th October 1933 with Ben Lyon in “Pullman 12” (By Who’s Hands). On 28th June 1935 the Casanova Cinema was re-named Rex Cine. Bother cinemas closed in 1937 and were remodelled to the plans of architect B. Christiaens. On 21st April 1945 the Rex Cine was re-named Corso Cinema.

In 1959, the Rialto Cinema play “Ben Hur” as a roadshow engagement. The Rialto Cinema was modernized in 1976 and now had 540 seats in orchestra and balcony levels. It was twinned in April 1983 with Rialto 1 having 400 seats and Rialto 32 with 260 seats. It was destroyed by a fire on 29th September 1984, which left only the four walls standing. The Corso Cinema remained intact. It was rebuilt and reopened as the Rialto Cinema, now with 5 screens, which also incorporated the Corso Cinema. Total seating capacity for the multiplex was 990. It was then the only cinema in Ostend in the main street Langestraat, the others Plaza Cinema and Capitole Cinema were closed.

In the early-2000’s, the arrival of the Kinepolis Ostend multiplex made the Rialto Cinema go into financial difficulties. It tried with art house programming and cine club, but finally the family was obliged to close it definately in 2012. Since then it has been demolished and flats have been built on the site.