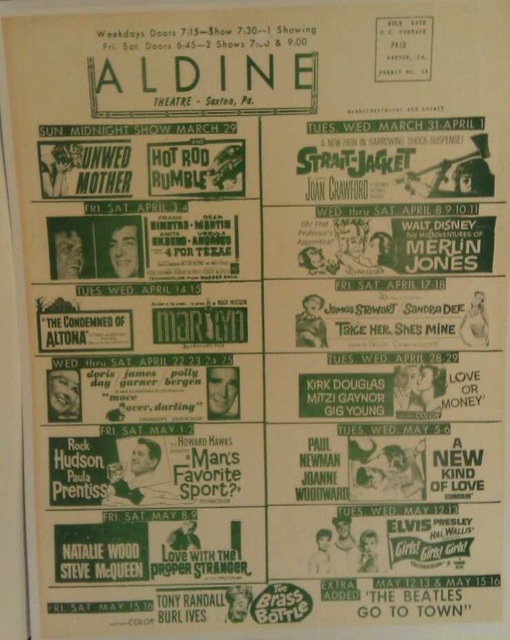 Built on the site of the Liberty Theatre which had been destroyed by fire. The Aldine Theatre opened November 21, 1935 with Dick Powell in “Thanks A Million”. It was closed September 15, 1978.

An article in the June 26, 1981, issue of The Daily News of Huntingdon, Pennsylvania, said that the former Aldine Theatre, which had shown its last movie on September 15, 1978, was being remodeled for use as a dental clinic. The Aldine had opened on Christmas Day, 1935, and was a rebuild of a theater half its size, the Liberty, which had been destroyed by a fire on June 26, 1935. T. J. Hickes was the owner and operator of both the old and the new theaters.

The dental clinic has since moved on, and the Aldine Theatre building is now occupied by a church. The style and construction of the brick building would have been quite old fashioned for 1935, so I suspect that the outer walls of the building survived the fire and were reused. The Liberty, which was in operation at least as early as 1922, most likely began life as a storefront theater taking up half the building, while the Aldine occupied the entire width of the rebuilt structure.

I added a picture from 2012. You can see that Joe is correct. The entire back half and front façade are new, but the front half of the side wall contains numerous older style arched windows, which have been filled in. The vitrolite front is still in great shape, and it seems likely that the marquee is still there, under some cheap vinyl siding.