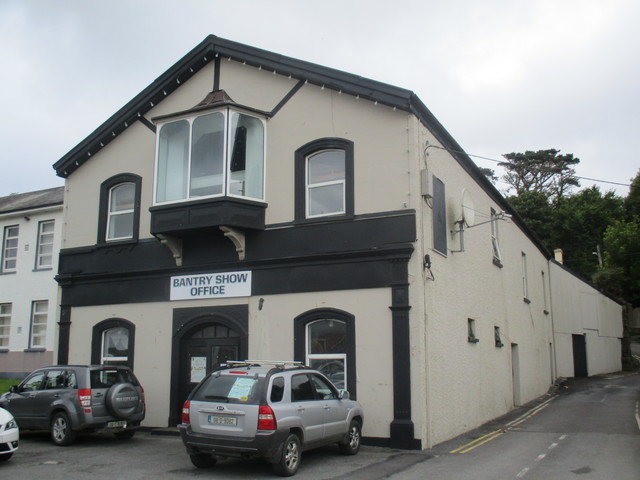 Located on The Square at the corner of Wolfe Tone Lane, Bantry, County Cork. The Stella Cinema was opened prior to 1931. It presented pictures & variety and had one dressing room. By 1938 late-night dances ‘til 3am were also being held in the building. It was equipped with a Western Electric(WE) sound system.

The Stella Cinema was still operating 1966.

When I visited Bantry, in August 2017, the former Stella was up for sale, with only part of the front being used by the administration staff of the Bantry Show. They kindly allowed me to look around, but there was no trace of the building’s former life as a cinema or other place of entertainment.

I then visited the town’s museum, where the lady manning the front desk, a life-long resident, told me the Stella was built in 1920. Long-time projectionist Fred Burkett had a photography shop in the town. The 1940 Kine Year Book (KYB) lists the proprietor as W. McSweeney, with films booked at Tralee (and seating for 400); the lady had said it was owned by Mrs McSweeney, of Tralee. The 1953 KYB lists the proprietor as A. McSweeney, possibly W. McSweeney’s widow. (The 1953 KYB lists seating for 600, a 7ft wide proscenium and a 15ft deep stage.) Later, the Stella was owned by Rex Murphy, and managed by his son Gerard. Sadly, Gerard died in a boating accident in 1985. The Stella apparently continued for a few more years, but closed in the late 1980s. (Please note: This history is based on the lady’s recollections, having been put ‘on the spot’ when I suddenly turned up, and details I later discovered in the KYBs. So I would welcome any clarification or further information that other contributors can provide!)