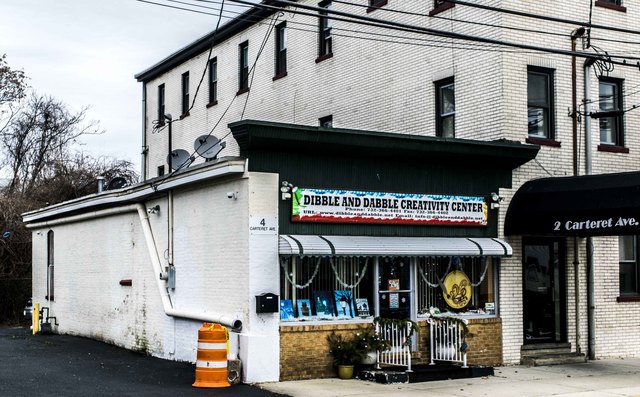 In April new management took over, changing its name to the Electric Theatre, adding vaudeville, illustrated songs and other attractions to the film presentations twice weekly. It closed briefly during the summer, reopening under the same management in late August.

Management changed once more before it closed in late-March or early-April 1912.

There are records of moving picture shows being presented at other local halls dating back to early-1909. They however operated one or two nights a week and were short lived. While only having a life of about 14 months, Canda Hall, as first Dreamland Theatre and then the Electric Theatre, is the earliest known venue to present motion pictures on an almost (generally 4-6 days/week) daily schedule in Carteret.

Canda Hall was a single story attachment to the 3 story Canda House Hotel, built in the first decade of the 20th century. Starting in February 1911, an unidentified exhibitor rented it full time, and advertised as Dreamland Theatre, presenting 4 and later 5,000 feet of “motion pictures” 6 days a week, content changed daily.

In April, Wagner Amusement Company (a single individual) assumed management and renamed the venue the Electric Theatre, adding other attractions such as vaudeville and illustrated songs twice weekly, sometimes expanding to 3 nights, along with 8,000 feet of “moving pictures” 6 days a week.

In late May, Wagner announced that for the summer season he would expand his operation by moving his Wednesday and Saturday shows to two larger halls in town, Kish’s Hall on Wednesdays and Nash’s Hall on Saturdays, with the Electric Theatre open on Mondays, Tuesdays, Thursdays and Fridays.

Nash and Kish Halls were used by exhibitors for moving picture shows at least since the spring of 1909, offering weekly or twice weekly events. These halls were at opposite ends of the Borough, Nash in Chrome (as was the Electric Theatre) and Kish in the Hill section of Carteret.

It appears Wagner ceased operation for a time that summer, most likely due to light box office receipts that accompanied the seasonal heat and humidity in the days before air conditioning or adequate ventilation. While there is no record of a formal announcement of closure, in August he announced that the Electric Theatre would reopen on the 26th, with Wednesday shows at Kish’s Hall starting on the 30th and Saturdays at Nash’s Hall 3 days later.

In November it was announced that the Adam Richter Amusement Company purchased the Wagner interest in the Electric Theatre, promising “the best show ever in town”.

The March 28th 1912 edition of the Roosevelt News carried a coupon for free admission to the Electric Theatre the following evening, $.10 otherwise. No ads appeared in subsequent issues, but an item in the April 27 issue of The Moving Picture News mentioned that The Electric Theatre had closed “on account of dull business”.

Much thanks to the Borough of Carteret Historical Committee for allowing me to research the material they curate that made this listing possible.