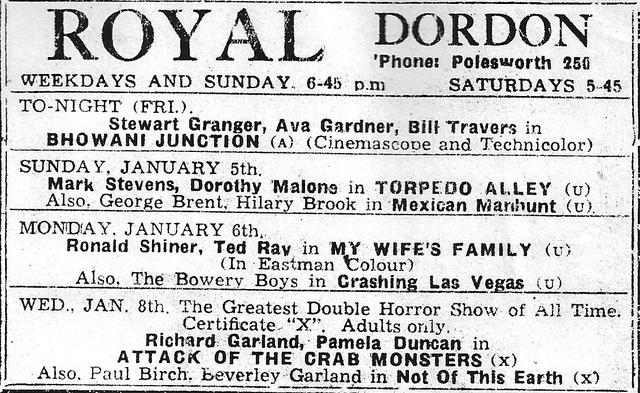 Located in Dordon, Warwickshire. The Royal Cinema opened in 1932 and was a very cheap pre-fabricated type building. The Regal Cinema was built for a Mr. T. Goldberg who sold his interests in the site to Mr. W.A. Brown of Dordon in 1935. The auditorium had an exposed loft style ceiling which created havoc during rain storms as the noise of the rain on the roof drowned out the sound of the film. The Brown family ran the Royal Cinema until 1968. The cinema had two Kalee 6 Projectors installed one with a Ziess lamphouse and the other with a Kalee lamphouse. The fist CinemaScope film shown at the Royal Cinema was “Trapeze” staring Burt Lancaster.

Following the cinemas closure the freehold was sold to Mr. Bob Sankey who intended to use it as a warehouse for his cinema supply business, however this did not take effect and the Royal Cinema became a shoe warehouse / shop outlet in 1975 this closed in 1977. The building remained empty until it was demolished in 1989.