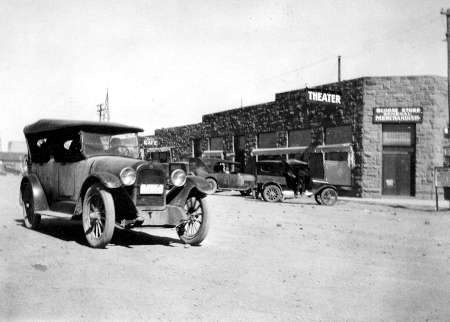 Located on the corner of Navajo Boulevard and Joy Nevin Street (today US-180 and NE Central Avenue). The Pastime Theatre was built in 1920, opening in January 1921 as a silent movie theater. It had a stage for live performances and also space for dancing. In April 1924 it was renamed Bluebird Theater on August 8, 1924 had been renamed Liberty Theater.

It was equipped to show sound films from December 8, 1929 and in August 1931 it was equipped with a RCA sound system. The projection booth and auditorium were destroyed by fire in October 1935. The front of the building survives today, with three small windows above the bricked in entrance.