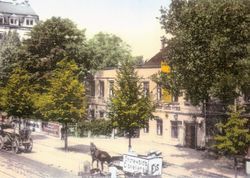 Located in the Striesen district to the east of the city centre. The Gloria-Palast was a conversion of the Striesener Inn to the plans of architect Martin Pietzsch. It was opened in 1926.

The Gloria-Palast was destroyed by the Allied incendiary bombing raids which devastated the city on 13th & 14th February 1945.