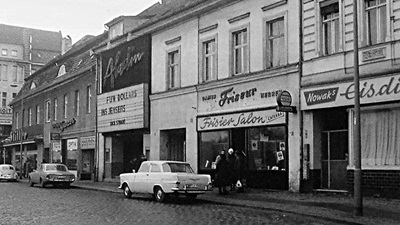 Located in the northwest Berlin district of Spandau. The Spandauer Lichtspiele was opened in 1911. In 1920 it was re-named Decla-Lichtspiele and it was closed in 1925.

It was re-opened in 1942 as the Harvel-Lichtspiele and this operated until 1955. It was renovated to the plans of architect Heinz Kroh and re-opened in 1955 as the 770-seat Aladin-Filmtheater. This was closed in 1967 and the building became a supermarket, which was still operating in 1995.

In recent years it has been converted into a 5-screen multiplex by the Cineplex-Germany chain. The largest auditorium has 300 seats and the smallest has 135 seats.