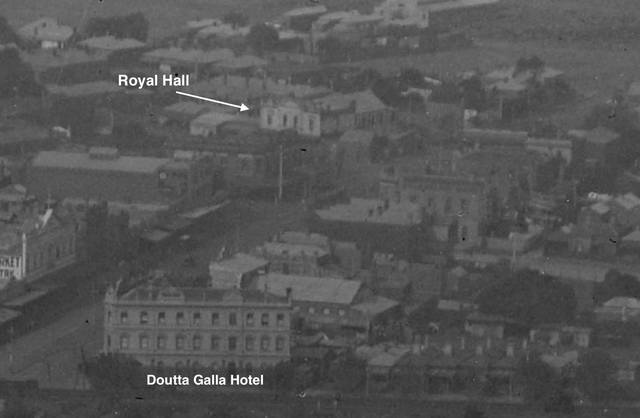 Located in the inner city northeast Melbourne district of Flemington.

Notice- Friday 19th March 1886 - The Royal Hall, Princess Street, Flemington has just been completed. The hall has been built to the order of Mr. John Crichton to cater for the increased population. The dimensions of the main hall are 48ft x 25ft. There is a commodious gallery capable of seating 100 persons, while 450 persons can be comfortably seated on the lower level. A fire-proof stair leads to the gallery located directly from the vestibule, with a cloak room on the right. The floor is of Kauri pine, and has been specially constructed for dancing purposes. Ventilation has been most carefully attended to with six large ventilators being place in the ceiling, while two escape doors lead from the stage. There is a large kitchen provided with a boiler, fire place, water connection, and every other convenience.

The architect Mr. A.E. Duguid of 22 Collins Street, West Melbourne deserves the highest praise for the design of the façade, which is certainly the finest in the district. Mr Leith of Newmarket is the contractor, and the manner in which he carried out the work is most satisfactory, especially when the short time of four months was allowed for the erection of the building.

Comment: Information on the Royal Hall is scarce however we know films were screened at this venue: To quote The Truth Newspaper dated 8th September 1917 under the heading “Movie Menace - Peril at the Pictures” where the council processed against Thomas Sangston, the occupier of the Royal Hall who failed to house films in proper spool boxes and failed to make the door of the bioscope box self-closing. In addition there was insufficient ventilation and worse no port shutters were installed. C.V. Lyster the Inspector of Theatres gave evidence of the great risk of nitrate film fire. A fine was imposed on Thomas Sangston of £2.10s with £1.1s costs and a severe warning was applied.