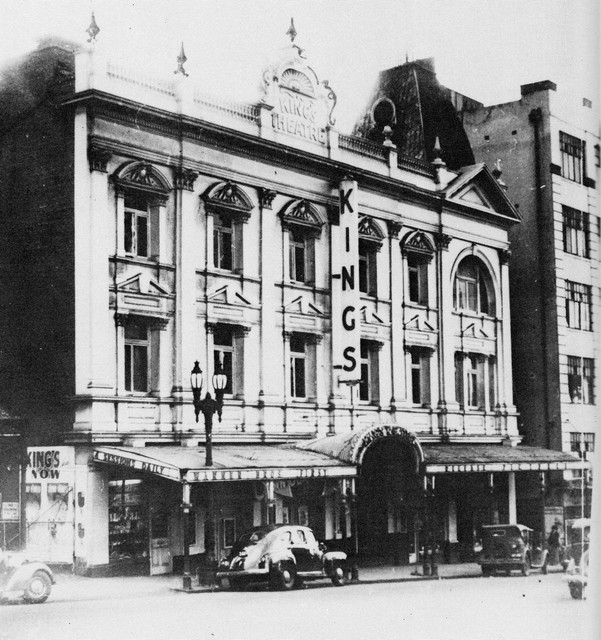 The 1,376-seat King’s Theatre was built in 1908 as a live theatre, opening on 11th July 1908. Designed by architect William Pitt, seating was provided 2,200 in stalls, dress circle and upper circle. It was later taken over by Greater Union Theatres from 1942 and converted into a cinema. It played Humphrey Bogart in “Casablanca” for 29 weeks! From April 1949 it reverted back to live theatre use. The last theatre presentation was the comedy play “See How They Run” by Philip King which opened on 20th April 1951.

On 24th May 1951 it re-opened as a cinema with Victor Mature & Hedy Lamarr in “Samson and Delilah”.

The King’s Theatre closed on 13th February 1958 to be re-modelled by Greater Union, when the auditorium was gutted to create a cinema with seating in stalls and circle levels. It re-opened as the 1,054-seat Barclay Theatre on 12th December 1958 with Charlton Heston in “The Ten Commandments”. It played mainly Paramount Pictures. The Barclay Theatre was closed on 15th March 1970 for alterations to be carried out which included the installation of 70mm. It re-opened on May 14th 1970 with Lee Marvin in “Paint Your Wagon” which played for 84 weeks. Other successful films were “The Godfather” (66 weeks), “The Sting” (65 weeks) and the final film to be screened was “One Flew Over the Cuckoos Nest” which played for four months and closed the Barclay Theatre on 3rd June 1976.

It was demolished and the 6-screen Greater Union Russell Cinemas was built on the site and opened in November 1978. (it has its own page on Cinema Treasures)