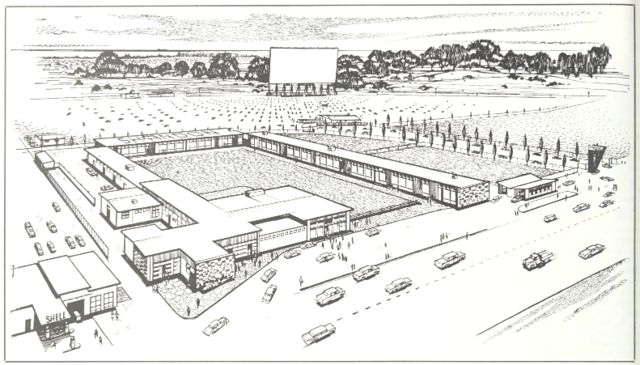 Opened on 4/7/1956 with “All that Heavan allows”(7.30pm), and “Yankee Buccaneer” Closed on 27/2/1985. There was a motel(name unknown?) next door where the rooms could view the movies and tune into the sound as well. The drive-in has been demolished(date unknown?). Unknown if tne motel is still there?

The April 1, 1959 issue (the 1959 Theatre Catalog edition) of Motion Picture Exhibitor ran a two-page story on the Shandon Drive-In and Hotel-Motel at Seaton. It was apparently the first drive-in with an adjoining motel with rooms wired for movie sound – I wonder whether the later US drive-in motels took any inspiration from that article.

According to Motion Picture Exhibitor, the Shandon-Seaton held 1,003 cars and had a 100x44-foot screen and a dining patio.

The drive-in has been demolished(date unknown?). The site is now houses. Unknown if the motel is still there?

I’d say the Links Hotel is the Hotel with renovations done, the shape is pretty much the same as in the render/drawing and there’s still a petrol station next door just like in the drawing. So yes, the hotel/motel is still there now called the Links Hotel.

The hotel(then called Shandon Hotel) had two of its rooms fitted with plate glass windows and speakers to watch and hear the movies from the rooms.

This drive-in had its own newspaper called the Shandon News.