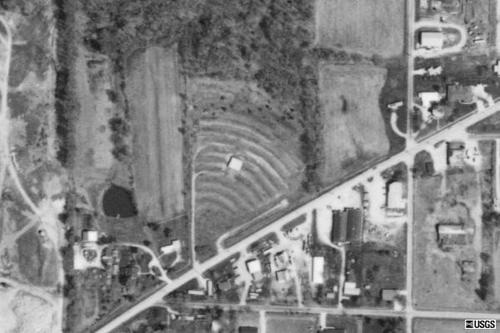 The Olney Drive-In was opened in April 1949. By 1955 it was operated by Raymond Worthery.

Concession Stand/Projection Booth is still there.

OLNEY, ILL.—Construction of a 450-car drive-in theatre has been started on a ten-acre tract on the north side of route 50 west of the local city limits. It is opposite the skating rink on the Lemay property.

The general contract has been awarded to Leland Jared of Olney, while Robert Hill, whose home is in Evansville, Ind., is personally supervising the construction. The plans call for a screen tower 50 feet high and 55 feet wide. There will be individual car speakers and other modern conveniences for patrons.

It is planned to open the theatre early next April and to operate it until November 15.