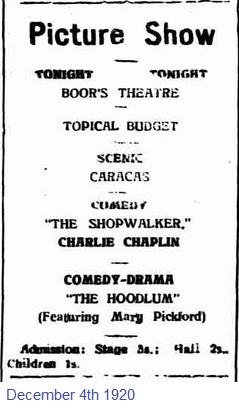 Located on the northwest corner of Robinson Street and Alexandra Street. Boor’s Drapery Store(named after J.A.(John Arthur) Boor) opened in(1902?). Boor’s Theatre opened in the back of the Drapery Store on 6th February 1915. The theatre was also used for dances and live performances. The theatre and drapery store was gutted by fire on 7th March 1922(reason for fire unknown?). The theatre and drapery store? was not rebuilt. The site is now a supermarket(Woolworths).