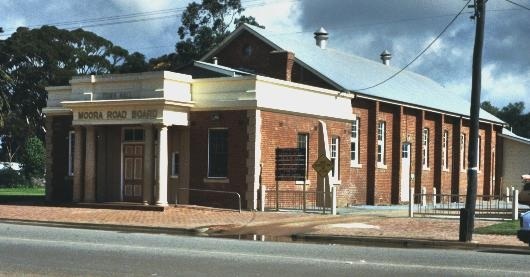 The first movie screenings in Moora was in November 1908 in the Agricultural Hall. The Town Hall opened on 11th June 1913 with 450 seats. The Agricultural Hall became the Lesser Hall. Movie screenings started on 9th September 1916 with “The Long Chance”. A Gardens was built on the south side of the hall(opening date of the Gardens unknown?) which also had 450 seats. The movie screenings in the hall and gardens ceased a year after the Moora Drive-In opened. The projectors went to the Meekatharra Picture Gardens in 1988. The gardens have been demolished(date unknown?). Movies were screened again in the Town Hall once a month in summer in 1993. The Town Hall(and Lesser Hall?) is still there, but no longer screens movies.