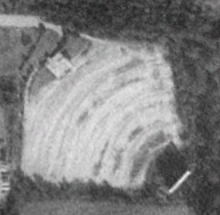 The Forum Drive-In was opened around 1956. It was closed around 1997. It is located behind Speedway Ford.

While topo maps are known for displaying old information, I’ve yet to run into an aerial photo that was dated wrong. Certainly not several years off like it would have to be assuming the Forum Drive-In opened at that location in 1956.

The same 1962 aerial shows the Spaulding Drive-In, but the area where the Forum is suppose to be is clearly still forest. So, I’m inclined to believe that the Forum was not built until the mid-1960s at least at that location unless it can be shown that the aerial photo is dated wrong.

So I’m Assuming That Around 1963 Or 1964 Maybe The Forum Might Have Been Built. Could Be True Right? I Wonder If You Can Find The 1963 Or 1964 Aerials Of The Georgia Area Drive-Ins. Since 1962 The Forum Wasn’t Still There Yet. 1956 Could Be Incorrect Now For Me. That One User Who Sent The Comment On The Iris Drive-In Page Is Wrong.

NETR is an online source for aerial photos and topo maps. The next year they have after 1962 is 1981. The topo maps do not show anything between that time either, but then again topo maps often have old information.

Okay. So Maybe Someone Will Edit The Opening Year.Because Now I Believe That The Forum Is Built After 1962. Also Kenmore, Do You Think The Capacity Did The Forum Have? It Looks Like 150 Or Maybe A Bit Downgraded. When I Looked At Google Earth, Geez Louise It Is A Pretty Small Drive-In, Not As Small As That One 50 Capacity Location In South Carolina But It Sure Looks Pretty Small. I Will Say Maybe Around 100-150 Range.

150 to 200 seems about right. It’s not very big, although it is usually tough to tell just from an aerial of how many cars it can hold.

Yeah It Is Pretty Small. Have You Went To The Forum Previously Before?

Buildings demolished, site is completely overgrown – you can just make out some ramps and the trees have grown in the lines of the ramps.

Kennerado, I Can See That As Well.