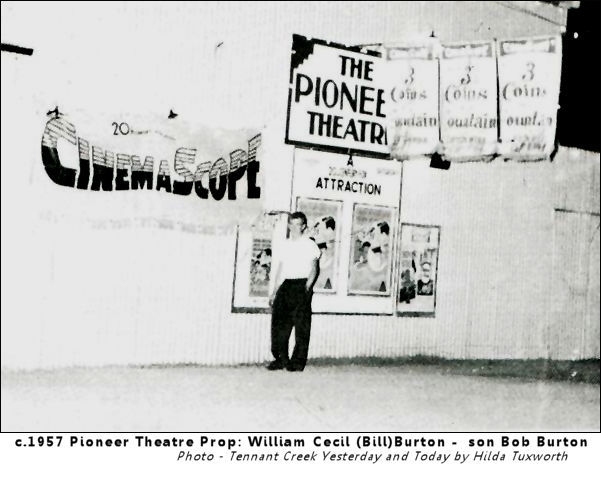 Was there a drive-in in Tennant Creek?

This theatre may have been demolished(date unknown?)?

Greg Lynch says – UPDATE – The Pioneer Open Air Theatre, Paterson Street, Tennant Creek (known as the old picture theatre) operated between 1935 and 1974 – The original owners of the Pioneer Theatre were the Delaware brothers, (whose occupation in 1935 was listed as “Showmen” in Rockhampton, Qld. ) Reuben and Theodore Delaware are described as the picture show owners – responsible for bringing the “Talkies” to Tennant Creek in the pre-war years, and, it is assumed that they also erected the building … The Pioneer Open-Air Picture Theatre measured 100ft x 50ft, and was surrounded by galvanised iron fencing, complete with an earthern floor, canvas seating, and a capacity of 400. The legend of The Pioneer Open Air Theatre, Tennant Creek however is the story and vision of William Cecil (Bill) Burton who was born near Winton in Qld, working as a projectionist with a traveling picture show. He arrived in Tennant Creek during the the middle 40’s – In 1947 he began work on a new open air theatre he was to call “The Star” – Early in the piece he found there was not sufficient power available from the town supply and he had to install his own generator. As advance bookings rolled in it was obvious that the capacity was inadequate, and extra seating was secured to house the additional patrons. The grand opening was on Saturday 30 May 1947 and business was good. There is no doubt that “The Star” was affecting the box office of the Pioneer which was located across town, also in Paterson Street. Early 1949 and Bill Burton ( the prevailer ) takes over the lease of the Pioneer Open Air Theatre from the exhibitor Robert (Shorty) Shortt, and decides to consolidate and close “The Star”. The final screening at The Star Open Air Theatre was in February 1949. The building was sold to the Tennant Creek Co. Operative. Storms and fire during the 1950’s saw the demise of the building, the stage was destroyed in 1954, some years later a fire, and then finally a storm in 1958 razed the building. The Pioneer Open Air flourished under the management of Bill Burton and his family. The theatre’s floor was finally concreted and there was a program change three times a week. The entrance is marked by a string of colored lights, and The Pioneer Theatre sign is painted on a sheet of tin, greeting the patrons as they enter. During the early 50’s the installation of big screen CinemaScope made it necessary to widen the northern side of the building and the entry section. The theatre was now able to seat 600 patrons. Bill Burton remained the proprietor of The Pioneer Open Air until his death in Nov 1968, leaving his family to carry on in the day to day running. Then with much foresight, Bill’s son, Robert Joseph (Bob) Burton carried forward his fathers legacy and built The Tennant Drive In Theatre located in Peko Road..The new drive In opened in 1972 with a capacity of 250 cars. This had the unfortunate result of reducing attendance’s at the Pioneer Open Air, finally forcing it’s closure in 1974.– There was a fire in 1977 – It was found that the rear storeroom and projection room were alight and damage to those areas severe. Cause of the fire was thought to be children smoking in the theatre store. By April that year the Pioneer Theatre was ordered to be demolished…FIN… I am indebted to local Tennant Creek identity & historian, Pam Hodges for her contribution to the history of The Pioneer Theatre. Acknowledgements:: Pam Hodges – Tony Dowling. The Centralian Advocate (Alice Springs, NT) / Tennant Creek “Yesterday & Today” by Hilda Tuxworth / Northern Territory Government website –

RECOGNITION – A Tennant Creek Park to be named after Theatre Owner, Bill Burton ?. On the 8/10/1982 the Northern Territory Government / Barkly Shire Council announced and gazetted that a park would be named after William Cecil Burton. This was revoked on 06/04/2016 due to the park never being constructed. It is hoped that Northern Territory Government & The Barkly Shire Council will soon find a suitable location for the recognition of Bill’s considerable achievements. …..

Address was 100 Paterson Street(lot 44). After closure, the cold room of the theatre was used for a roller skating rink, until the fire on 30/1/1977. The foyer and milk bar at the front of the theatre building was the only part left after the fire. The Pioneer Milk Bar was too dangerous and ruinous (and closed?) and boarded up in 1989. A mural was put on the front of the old theatre building in june/july 2006. A fire destroyed the building and mural in 2009. The remains were demolished(date unkonown?), and the site is now vacant and still for sale.