The Crescent Theatre was a popular theatre in the early-1900’s featuring live performances as well as silent movies by 1914. It shuttered after it was gutted by a fire on Sunday, January 20, 1924 which reportedly started in a dressing room under the stage. The Odd Fellows Hall next store was also damaged.

Apparently no attempt was made to restore the theatre and in 1930 plans were announced to divide it into two stores.

As with many early theaters management changed quite often. As of February 1921 the Crescent and the nearby Garden were managed by Samuel E. Bleyer. The leases for both of these venues transferred to J.J. Fitzgibbons of the Bay Shore based Active Amusement Corporation in April 1922.

I have uploaded a double ad for the Crescent and Garden from July 1922.

The management of the Crescent was quite PR savvy. In addition to paid ads, see photo section, they also were able to get news coverage of current and coming attractions.

In September 1916 the theater was closed briefly for alterations; the following year, in the same period for repairs. No details available on either.

That ad cannot be correct, Comfortably Cool. Loew’s did not have a presence on eastern Long Island until the 1960’s.

I disagree. Marcus Loew Booking Agency was probably providing vaudeville acts for the Crescent’s management, which had the right to use Loew’s as part of the name.

Probably the case. I think I only saw on other Loew’s in the entire ad. I wonder how many of these theatres in the ad are on Cinema Treasures?

Same ad, but in the NY Times 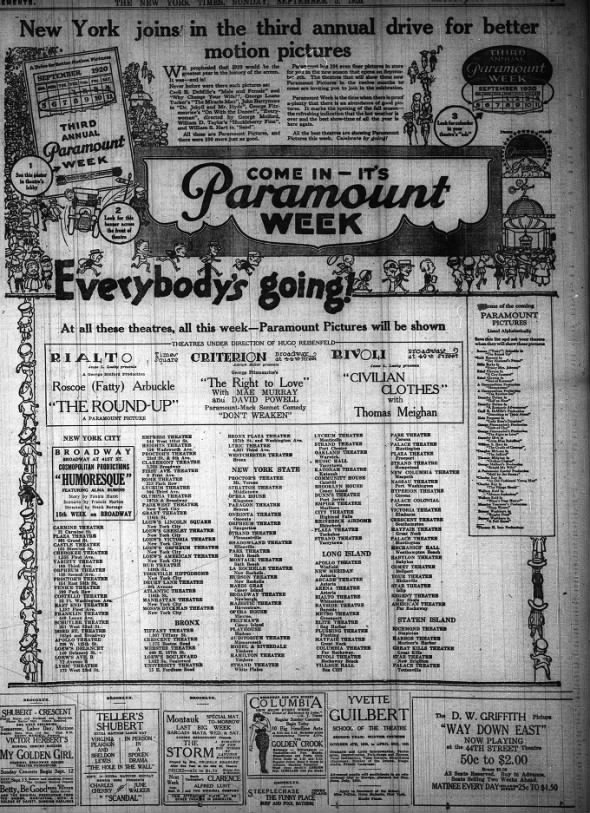 you may notice that the Crescent theatre in that ad is not a Loew’s.

Also had a look at this: https://archive.org/details/widsyearbook192000wids

again, not a loew’s.