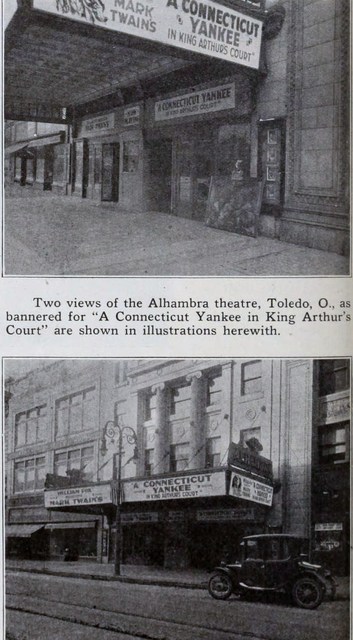 The Alhambra Theater was built in 1911 and was managed by H.C. Horater and John J. Gardiner. Demolished.

The Alhambra will close on July 1 for a short time, to be redecorated, remodelled (sic) and repainted. New draperies will be installed and a $25,000 Hope Jones Unit organ will be installed.

Horater thinks the coming year will be the biggest in the history of the business and says the prices asked for productions, so far as he is concerned, cut no figures so long as the productions are good. He states that producers from whom he has heard say they intend making fewer pictures for the fall season."

Cross referencing to the Wurlitzer Organ Company (Hope Jones) opus list shows their opus 325, a style 135A organ, sold to the Alhambra. It was small II/4 + piano and had a piano console rather than the more prestigious horseshoe console. The cost of a 135A was +/– $8,500 rather than the $25,000 stated in the article. Personaly opinion: the little 135A would have been significantly underpowered for a 750 seat auditorium.

It is noteworthy that 10 days prior to the contract for this organ, a contract for an identical organ was signed for the Alhambra Theatre in Columnbus Ohio. One assumes a connection in ownership of the two halls.