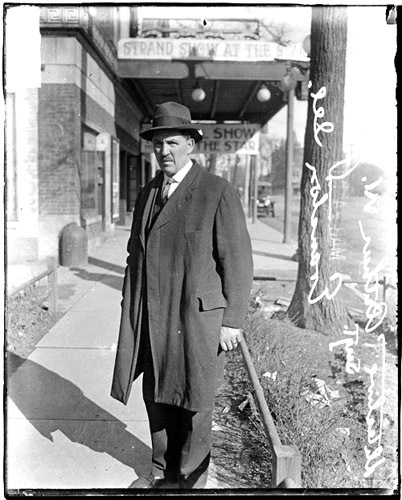 The Star Theatre was located in the Wicker Park neighborhood, on Milwaukee Avenue, between Honore Street and Evergreen Avenue, not far from Wicker Park itself. It opened in 1907 and was designed by Oscar Ccobb.

Sometime in the 1920’s, it was renamed the Royal Theatre, and continued to operate at least through the 1970’s. In its later years, the Royal Theatre was a Spanish-language movie house. The theater was demolished around the early-1980’s and a new structure built on the site.

The building at that address was torn down, probably in the 1980s; the new building houses a gas company office. No other buildings on that block appear to have been theaters.
.pc

The Star was built in 1907. The architect was Oscar Cobb.

The Royal theatre was in operation at least through May 1963, and I suspect for another few years after. From the Chicago Sun Times movie listings on Friday, May 3,1963:“PIT & THE PENDULUM” Thriller “COLORADO”–“HIGH SCHOOL BIG SHOT”. Was never inside, but passed by on foot a few times. I recall a very wide area between the box office (which was connected to the front doors)and the ticket taker. Here you could see many “lobby cards” and other posters advertising upcoming films. The Royal had a 3 or 4 change a week policy- like the Mode and the Deluxe theatres. If you rode the CTA blue line at the time, you could see the Royal’s marquee as your train dipped into the subway after the Damen stop, heading south to Division. A friend, who was inside the Royal, says his one vivid memory is of the men’s room. “The walls were painted all red…I felt like I was in hell”.

Most piquant memories re-surface from my childhood of the ROYAL! “DINOSAURUS!”–“BRIDES OF DRACULA”–“THE COSMIC MAN”, etc. Yeah the bathroom was colored hellfire red. Cheapest place around – 35 cents for triple features. Remember the pair of timers/clocks behind the ticket booth telling ‘time getting-in / time getting-out’(when we’d leave ‘cause “this is where we came in at”)? Perfect baby-sitter place for my Mom while she went shopping at Milwaukke Ave stores, and I couldn’t have been happier. In the late '60s their fare was Mexican flix.

there’re 2 definitive 8x10 BW photos of the ROYAL THEATRE—from 1958 and maybe 5 yrs later. they’re both on file for anybody to reference at the Chicago History Museum; i just saw them myself and will make request to allow them to appear here leading-off this CT theatre listing, where you might say they rightfully belong.

The earlier one is just as i remember it down to the admission prices seen.

I believe the theatre had a fire in the Summer of 1978, Along with a few other businesses, I believe one of them was a once popular Hungarian or Slavic violin player restaurant.

An 1888 Chicago Tribune article on Milwaukee Avenue mentions a “Star” Theater; I’m wondering if it was originally a smaller theater and was torn down and rebuilt at the same address in 1907.