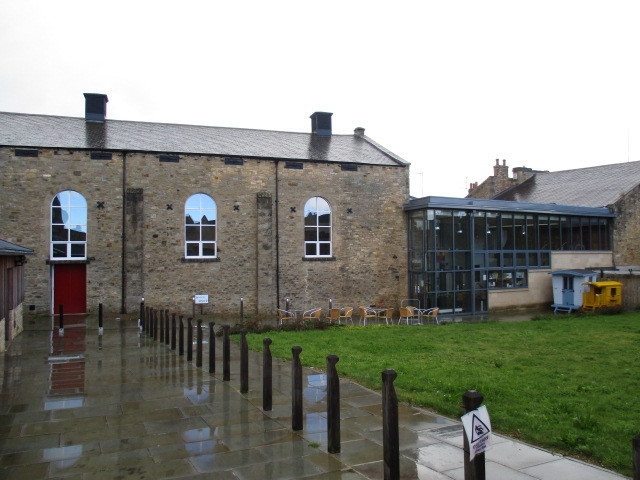 In Barnard Castle, County Durham, this building was erected by public subscription as a testimonial to the memory of Henry T.M. Witham, of the nearby village of Lartington, a public benefactor who had strived to make provision for the medical and educational needs of the town before his death in 1844.

Hence the building, which opened in 1846, housed the Mechanics' Institute and a Dispensary for the Relief of the Sick Poor.

By 1860, a large music hall had been built to the rear, whilst the premises later incorporated several small cottages in Hall Street. Together these buildings became known as The Witham. They have continued to provide a place for public entertainment ever since.

In 2003 a ten year project was initiated to raise money and carry out work to restore the historic fabric and make The Witham fit-for-purpose as a fully accessible modern arts venue. This saw the original Grade II listed Witham buildings restored, and a new link building constructed between the Witham Testimonial and the Music Hall, incorporating a foyer area, café bar and toilets. In addition, Durham County Council has extended and refurbished its Library building to the rear, to include new council offices and a customer access point as well as the continued Library service.

Funding of the project principally came from Durham County Council investing over £2 million, with match funding of £336,000 from the Heritage Lottery Fund and £773,879 from the European Regional Development Fund.

In addition to its many live events, ranging from family attractions and stand-up comedy to music and theatre, The Witham is host to film shows, primarily its ‘Film Thursday’ presentations and National Theatre Live, and similar, screenings.

These are presented in The Music Hall, a flexible, multi-purpose auditorium with retractable seating that is equipped with a full theatrical lighting rig, PA system and Dolby 5.1 cinema surround sound.