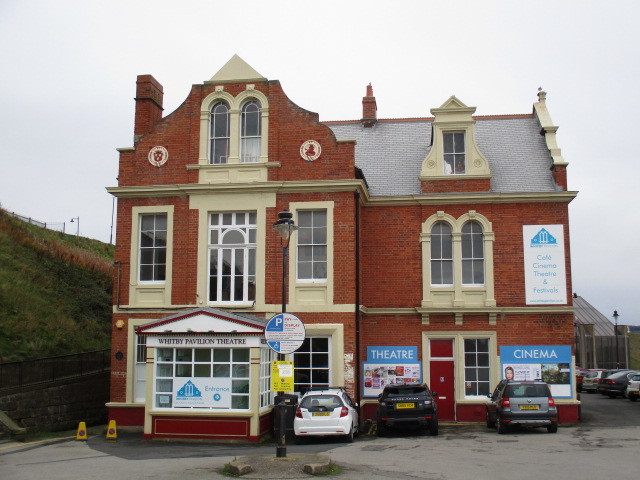 In Whitby, on the North Yorkshire coast, Sir George Elliott, MP, erected the Pavilion as part of the West Cliff estate as a saloon, theatre and pleasure grounds. The complex is located below the cliffs, above the beach, overlooking Whitby Bay. It opened in 1879.

The Theatres Trust describes the Pavilion as “a plain Victorian building of domestic appearance externally, having a flat floored hall with a balcony of nine rows and slips that are divided into three unequal bow-fronted segments supported on plain pillars. Plain barrel-vaulted ceiling over stalls with a raised steeper pitch section above the circle. Very much the feeling of a pier theatre on dry land! The stage is shallow and has no flying facilities”.

Following a major renovation, including the construction of the multi-purpose Northern Lights Suite as an extension to the existing complex, the revamped Whitby Pavilion was opened on 8th September 1990 by Sir Leon Britten, Vice President, Commission of European Communities.

In 2010 it was announced that the North Yorkshire Rural Cinema Pilot Scheme would be delivered by a consortium headed by regional screen agency Screen Yorkshire and comprising the community arts company Blaize, the National Media Museum in Bradford and North Yorkshire County Council. Backed with £400,000 of Lottery funding over three years, the consortium was to acquire digital cinema projection equipment which would operate in easily accessed local venues across the region, including Whitby Pavilion.

Screenings started in 2011. There are 232 seats in the stalls and 141 in the circle, although only the stalls are used for film shows (the digital projector is placed in the centre of the circle). In 2012 Sheffield International Venues entered into a 10-years partnership with Scarborough Borough Council to manage and develop the Pavilion complex. Film screenings are presented is association with Film Yorkshire.