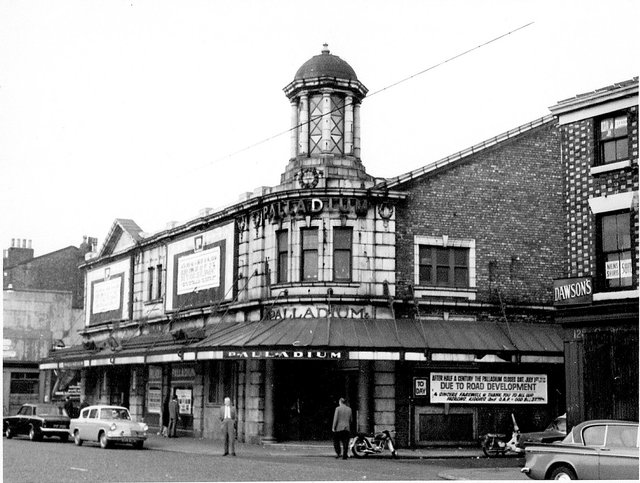 Located in the northeast Liverpool suburb of Tuebrook. The Palladium Cinema was on a corner site at Butler Street, with the auditorium running parallel to West Derby Road and opposite St. Michael’s Church. Designed by architect Arthur Ernest Shennan of architectural firm Nagington & Shennan. The corner entrance was faced in stone and had a round tower on top. Seating was provided for 655 in the stalls and 250 in the circle.

The Palladium Cinema was opened on 10th May 1913 with “The Penalty”. It was equipped with a Western Electric(WE) sound system and screened its first ‘talkie’ “Fox Movietone Follies” on 21st April 1929. It was equipped with CinemaScope on 26th September 1954 when Richard Burton in “The Robe” was screened.

The Palladium Cinema was closed on 1st July 1967 with a ‘Farewell Presentation’ of “The Ten Commandments” starring Charlton Heston. The building had been compulsory purchased to allow for the widening of West Derby Road.